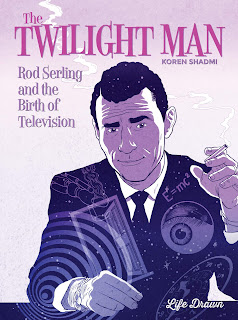 This graphic novel biography of Rod Serling opens with Serling on an airplane, talking with a fellow passenger about his life.  The moody black and white illustrations are reminiscent of the old Twilight Zone program, as I am sure the author intended.

I was vaguely aware of some of Serling’s background; as a fan of both TZ and later Night Gallery, I felt I had grown up listening to his stories.  What I didn’t know, and what Shadmi vividly portrays, is the source material that informed his writing.  Serling joined the military in 1943, an undersized Jewish boy who wanted to be a paratrooper and fight the Germans.  He was turned down because he was too short, but with the determination—some would say bull-headedness—he persisted until he was sent to training. Many didn’t make the cut; for Serling, failure was not an option.

But no training in the world can really prepare one for war.  Serling’s disappointment at being sent to the Pacific instead of Europe was soon shattered as death and destruction became real. The war would haunt his dreams the rest of his life.

Post-war, he went to college and decided he wanted to become a writer, a thing much easier said than accomplished.  The subtitle of the book is Rod Serling and the Birth of Television, which is entirely accurate.  This was the Golden Age of live dramas, where an infant industry tried to find its footing.  Serling wrote script after script, meeting rejection at every turn, until he finally broke through with a teleplay entitled “Patterns.”

But he still hadn’t found the formula that would let him say what he wanted.  Sponsors, executives, censors, etc. seemed to be intent on gutting his work, rendering it innocuous.  The suggestions to “improve” his script about Emmett Till are jaw-dropping.   It was a chance remark that led Serling to a revelation that would revolutionize television.

The book doesn’t stop there, but tells us about Serling’s life post-TZ. I admire Shadmi for showing us Serling warts and all; this book neither idolizes nor demonizes him.  It does portray a complicated, haunted man who made an impact on our culture.

This is an excellent resource for anyone interested in either Serling or early television.  Shadmi has appended an extensive bibliography.  I also enjoyed his afterword, in which he explained how he came to do the book. It’s a fitting book for its subject; I think Serling might have approved.