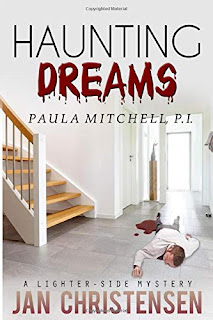 I’ve read Jan Christensen’s novels and short stories for a number of years and she has never disappointed me.  Her characters shine as if they were people living next door, and her plots are believable and relatable.  She’s written three previous novels featuring Paula Mitchell, a private investigator in Springfield, Rhode Island. Her new one is HAUNTING DREAMS.

Paula shares an office with her BFF, lawyer Geri Smithfield, and shares her life with her boyfriend, Steve Grady, an IT Consultant.  Steve lends his expertise if Paula needs it in her investigations, but at the same time, he wishes she didn’t work in such a dangerous profession.

Although Paula’s experiences do not involve a lot of gunplay, I liked that HAUNTING DREAMS begins with a bang.  Literally.  Here are the opening lines:

Shouting from the restaurant’s kitchen caught everyone’s attention, and the clatter of cutlery, dishes, and people talking ceased.  I heard a gunshot, someone screamed, and everyone else scrambled to either get under a table or rush to the door. I rose from the booth, grabbed my gun from its holster at my side, and dashed toward the kitchen door.

In the kitchen, she sees a cook has been shot and sees the shooter run out the back door.  She follows but the shooter makes his getaway.  The victim is only wounded and will survive, and the restaurant owner hires Paula to take on the case and find out who shot his employee.

What seems at first to be a simple case turns out to be anything but.  Paula begins by checking out the victim and other employees as well as the restaurant owner.  She is unable to find a record of some of them prior to twenty years ago.  When a second employee of the same restaurant is shot and wounded, Paula still has no clue who the shooter is or what his motive might be.

Paula then learns an enemy of hers from an old case has recently been released from prison and is stalking her.

There are more twists, turns, and surprises for Paula before she figures it all out, and you’ll enjoy watching her do it.  I said before I’ve never been disappointed by this author.  Trust me.  You won’t be either.

Earl Staggs Earl Staggs is the author of the books, MEMORY OF A MURDER,  JUSTIFIED ACTION, among others,  as well as numerous short stories. He has twice received a Derringer Award for Best Short Story of the Year. Past president of The President of the Short Mystery Fiction Society, Earl also served as Managing Editor of Futures Mysterious Anthology Magazine. His website is at https://earlwstaggs.wordpress.com/  and by email at earlstaggs@sbcglobal.net

Thanks so much for posting this, Kevin! And thanks to Earl for taking the time to review. I hope other readers will like it as much as he did.