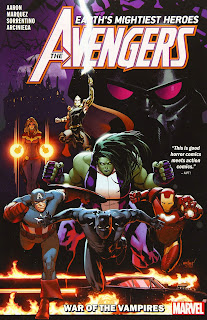 Avengers Vol 3: War Of The Vampires by Jason Aaron continues the story of the Avengers as they have to deal with various vampire factions that are having a civil war. The Avengers are not used to fighting vampires, but they have help from the best vampire in the vast Marvel Universe, Blade. Alongside the Avengers, Blade fights to keep the vampire war from spreading while dealing with the Winter Guard (Russia’s Avengers that work for a corrupt Russian Administration). For some reason, the Russians think it is a good idea to try to make a deal with Dracula instead of just killing him.

This story features all the Avengers and focuses on Ghost Rider and how much he does not know regarding his status. The Ghost Rider has to face the question of whether or not he is a monster. If he is a monster, how is he doing to deal with it? Will he make the same choice as Blade – be a monster that hunts monsters or try to find a way out?

I enjoyed having Blade in this Avengers team since he is not a character that is featured often, despite the fact that he is one of the cooler supernatural characters. Also fun and present in this issue is Captain America who has experience fighting vampires as he did so in Europe during World War Two. Iron Man also is present and is dealing with more family secrets regarding his adoptive father. 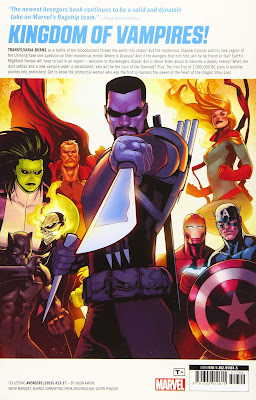 The action filled issue has plenty of other characters such as Dracula, various vampires, and an Evil Demon Dog. Also present is Thori which is a pet dog belonging to Thor. He is a talking, kill happy dog that wishes to be the “best murdering dog” he can be. He is fun.

The action is good and this volume connects very well to the other volumes in this series. The characterization of the characters is better in this book than the earlier ones in the series. I enjoyed Avengers Vol 3: War Of The Vampires by Jason Aaron and I recommend it.