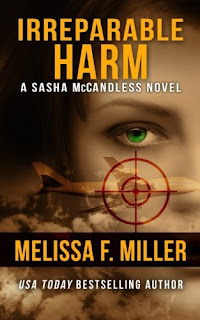 Irreparable Harm by Melissa F. Miller (Brown Street Books, 2011) is the first book in the Sasha McCandless series of legal thrillers. McCandless is a senior associate with Prescott & Talbott, a large law firm in Pittsburgh, who is working hard to be in contention for the partnership that will be awarded to just a few stalwart employees in the spring. The petite lawyer also takes Krav Maga classes every day before work. She’d had no reason yet to implement the lessons in hand-to-hand combat but they increased her self-confidence as she walked to her car late at night.

When a commercial airplane belonging to one of the firm’s largest clients crashed, losing all of the passengers on board, McCandless is assigned to lead the team preparing for the inevitable litigation. Not surprisingly the first lawsuit claiming the airline’s liability is filed within 48 hours. An agent with the Pittsburgh Office of the Federal Air Marshal Service component of the Department of Homeland Security, who is investigating the leak of sensitive information on social media, begins to cross-check his data against that of the crash investigators, which leads him to Prescott & Talbott. He and McCandless realize that their separate cases overlap, after they jointly discover a body and begin to work together.

I am always looking for legal thrillers and I read this entertaining, if not especially realistic, story in one sitting. I could wish there were less romance and more mystery and legal action but there was enough to keep me reading. Perhaps the later stories in the series, there are 11 of them, are more focused.

Melissa F. Miller is a busy author with four book series to her credit. Besides the Sasha McCandless stories, she writes about Assistant U.S. Attorney Aroostine Higgins in another legal scenario; Dr. Bodhi King, a forensic pathology consultant; and three sisters named Rosemary, Sage, and Thyme in a light cozy series that looks heavy on romance.