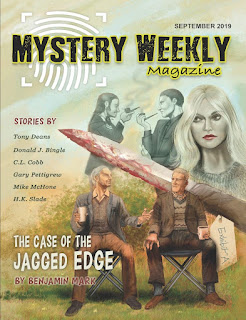 Mystery Weekly Magazine: September 2019 issue opens with “Mutatis Mutandis” by Donald J. Bingle. Uncle Tremont finally found something very valuable in the mountains out of Colorado. He is dying and intends to take the secrets of his mine to the grave. His nephew, Exter Devonfield, is fine with his uncle dying and the sooner the better as the uncle was a mean old buzzard. He just wants his uncle to tell him where the damn mine is first as there is money to be had and the nephew wants it all.

While the preceding tale was more of an adventure story that required some digging to uncover things as there is a mystery at its core, the next one is primarily a mystery tale that also seeks to uncover things. Dirt is also a major aspect of the tale as this time it is a photographer who takes pictures of celebs and others in compromising positions and circumstances and sells those pictures to make money. In “The Dirtman” by Tony Deans, the lead of the Amori crime family, Lorenzo Amori, has a job for the photographer. He wants photographic proof of certain activities committed by a problem person. He wants pictures in no later than seven days and will pay double the normal fee. One does not tell Lorenzo Amori no.

“The Case Of The Jagged Edge” by Benjamin Mark inspired the cover art for this issue. It features the interesting intellectual musings of Bartholomew Blunt and Samuel Sharpe. Friends since childhood, they pass their days by imaging the possibilities. On this day they imagine the possibilities in a murder case that fits men of their prestigious talents. 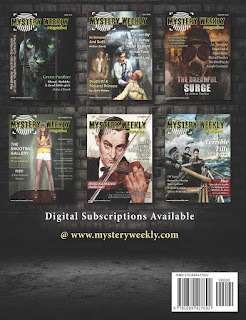 As was part of the theme of the first story, inheritance and everything that goes with that is a major part of “Within An Heir’s Breath Of Death” by C. L. Cobb. Uncle Harry is dying through a bit too slowly for some. Maggie, our narrator has been through hell and back. Her sisters, Alice and Constance, are going to do everything they can to grab it all.

Fred Hurst is the newly appointed police man for the local village. His first case in the summer of 1927 is to investigate the apparent murder of the previous village policeman, George Mahoney. In “Stumped” by Gary Pettigrew, Fred Hurst has his hands full.

It took far longer for the fire department to put out the car fire in “Burn” by Mike McHone than it took firefighters to realize they had a body in the car. The Nissan Sentra, or what is left of it, sits in the parking lot of the closed and abandoned Union Camp paper plant. Detectives Molly Fetterly and Jim Baggins have the case. Within minutes of their arrival, they know they have more than one serious issue on their hands.

The story starts off with a run in “Foot Chase” by H. K. Slade. Joshua “Country” Tumblewhite is trying to chase down a driver who fled a traffic stop. It is very important that the cops get this guy as becomes clear in the story.

“A-You-Solve-It” by Laird Long titled “Retirement Bash” is up next. Claire Botterill is finally retiring and the party is dragging on for nearly as long as her thirty years of service to the company. If that was not bad enough, Max Mann, office manager, has a problem as somebody has destroyed the parting gift for Claire. Who bashed the gift?

The solution to the August puzzle, “Fanfarewell” by Laird Long brings the issue to a close.

Each issue of Mystery Weekly Magazine runs the wide gamut of the mystery genre. Filled with mysteries (obviously), plenty of interesting characters, and fast moving situations, each read is a lot of fun without a bad story in the bunch.  Such is the case with the Mystery Weekly Magazine, September 2019 issue and is well worth your time.