Scott's Take: Batman: The Court Of Owls by Greg Cox 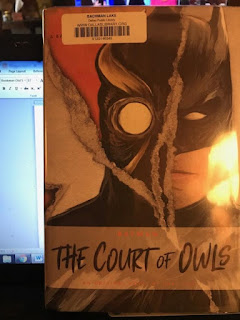 Batman: The Court Of Owls by Greg Cox is a recently released original novel that acts as quasi-sequel to the Court of Owls debut comics by Scott Snyder and Greg Capullo. Those comics are highly recommended and started off an acclaimed Batman run by that team during the New 52 which ran for several years as well as numerous other tie-in books. While I recommend the Court of Owls comic series, the first two volumes are the best. However, one does not have to have ever read those volumes since the Court Of Owls and Batman’s history with them is explained in the first few chapters of Batman: The Court Of Owls.

The Court Of Owls and their fearsome servants, The Talons, are some of the best villains to make their debut in recent years. They are a great addition to Batman’s rogue gallery. For those who do not know, a “rogue’s gallery” is the term used to describe the collection of villains, antagonists, and ne’er-do-wells that work against the superhero.

The Court of Owls is an evil society of rich people that have controlled Gotham from the shadows since the founding of Gotham. They are the power and force behind everything that happens and they seek to maintain their control of everything in the age of Superheroes and Supervillains. Serving them are their fearsome assassins called Talon’s. These are children that have been trained and brainwashed and raised to do the bidding of the Court of Owls. These now adults have also been augmented with a significant healing factor that allows them to, despite the severity of injury that would kill a normal person within minutes, regenerate what is needed to live and fight again.

The Court has a long history with Gotham and with the Wayne family and therefore things are very personal between the two groups. They pose a serious threat to Batman as well as Bruce Wayne. They know that Bruce Wayne is Batman. They have the numbers, the soldiers, the tech, the resources, and more to match Batman and his team of heroes pound for pound. 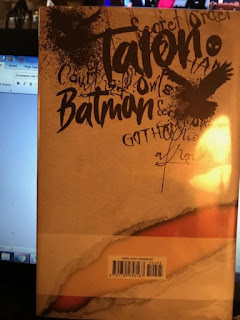 In this novel Batman investigates the torture and murder of a college professor by one of the Talons. Why would a fearsome society of evil kill a college professor? What information were they trying to extract from him? What happened and why are just some of the questions in this novel. The professor’s death was also very unusual even for Gotham. He apparently died as a result of being burned from the inside out. It appears that either just after or during torture, he spontaneously combusted. How is that possible? Each answer Batman uncovers raises more questions.

Batman: The Court Of Owls also raises fundamental questions such as is Gotham Batman’s city or the Courts? If the bad guys have controlled Gotham since the founding, can Batman really ever save the city? Will Gotham always belong to the Court of Owls? Can Batman, Alfred, and Nightwing ignore the family history with the Court and focus on how best to deal with the Court of Owls. If members of their families fell to the Court, what chance do they have against the descendants of the Court? This fight is not just about the city, but it is about the legacy of their families and the history of Gotham.

Batman: The Court Of Owls by Greg Cox is a novel that is equal parts action and detective work. A lot of Batman stories ignore the detective aspects of Batman. This novel does not do that and is filled with multiple mysteries at work. The read features Jim Gordon, Alfred, Batgirl, and Nightwing and those characters are also extremely well done. The novel is also filled with less important details that are fun for Batman nerds who enjoy the lesser known parts of Gotham’s history.

I also enjoyed the fact that Batgirl and Nightwing were capable heroes in their own right throughout the novel. In a lot of Batman novels I have read, there is tendency to make the younger heroes appear incompetent or a burden to Batman. This author understands that if they were either then Batman would never have trained them in the first place.

I also enjoyed how Batman cares about the people he saves and how he watches over them throughout their life. This mystery read is a really good book featuring a newer villain that many outside of the comic reading public are not aware exists. Batman: The Court Of Owls by Greg Cox is a great Batman novel and well worth your time.

Material supplied by the Bachman Lake Branch of the Dallas Public Library System.