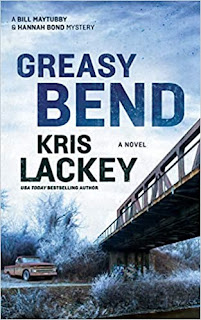 Kris Lackey is a native of Oklahoma. He is a former professor at the University of New Orleans and now lives in Norman, Oklahoma. His writing is packed with details of his native state. The title of his second police procedural Greasy Bend (Blackstone, 2019) is the name of a real bridge in Johnston County, Oklahoma. Built in 1911, the Greasy Bend Bridge was replaced by a new bridge in 2018. This span across the Washita River is no longer open to traffic, making it an excellent place to base a crime story.

The friendship of Johnston County Sheriff’s Deputy Hannah Bond and Sergeant Bill Maytubby of the Chickasaw Lighthorse Police began when they undertook law enforcement training in Ada, Oklahoma. They graduated at the top of their class and continued to collaborate when their respective beats crossed paths. They both lose friends to crime on the same cold day. Bond finds retired accountant Alice Lang in the Washita River with a bullet hole behind her ear two days after they packed groceries at a food bank. Maytubby hears from the desk dispatcher that his friend Tom Hewitt encountered a band of armed robbers at a Chickasaw Nation casino and was shot dead, leaving a wife and small children.

While their personal relationships with the victims keep them from being officially assigned to the investigations, they nonetheless pursue leads as their regular workloads allow. Their search snowballs and leads them into much more dangerous territory than anyone could have expected.

Beautifully written with bits of witty dialog, Lackey’s use of imagery is lyrical but does not overshadow the action-filled story. Solidly plotted with true-to-life detail. This book has overtones of Steven Havill’s Posadas County series, some of my all-time favorite mysteries. I am not sure what about this book reminds me of Bill Gastner and his crew. The credible everyday characters? The juxtaposition of two cultures? The Southwest setting? Maybe a little of all of three.

The two main characters are creatively developed; it is a pleasure to see two more or less ordinary people featured. It is also a satisfying change to see two highly competent police officers who are recognized as such by their management and who are not at odds with them. The rogue cop is a trope that needs to be retired.

This book satisfies my inner four-year-old’s need for a good story while meeting my more critical adult requirements for capable writing and characters I like. Booklist says “This series is a sleeper, well deserving of a larger readership.” Starred review from Publishers Weekly. I do not understand why I haven’t heard of these books before, but I am watching for the next one, which is due out in July 2021. Highly recommended.