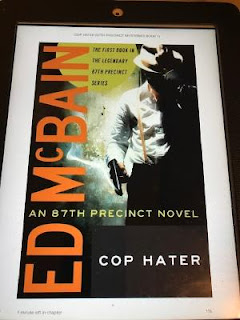 Cop Hater: An 87th Precinct Novel by Ed McBain (aka Evan Hunter) is the book that started the 87th Precinct Series. Originally published in 1956, it was republished by Thomas and Mercer in 2012. Back in the fall of 2019, Amazon made several in the series, including this one, free and I took advantage.

After an intro from the author explaining how the first book and the series came to be, the read opens with the weather and how the summer heat has its grip on the on “The City.” (I always thought this series was set in New York City, but as explained by the author in his intro, it is not and could be any major fictional city anywhere in the country.) Detective Mike Reardon gets up at 11:00 PM and goes about starting his day as he has the Midnight shift in the detective squad. By 11:41 PM, his walk to work is interrupted as two bullets entered the back of his head and punched out the front.

It was 11:56 PM when another citizen found him dead and made a call to the police. It is just after midnight and a new day and still hot as the Homicide Detectives from Homicide North survey the scene outside a boarded-up theater. It is close to 12:30 AM when Detectives Carella and Bush from the 87th Precinct arrive and roll the body over only to realize the murdered man is one of their own.

There were sixteen detectives assigned to the 87th precinct. The murder of Mike Reardon means there are now fifteen. It also means that they have another murder case to solve. That must be done while the other cases keep coming---the robberies, the rapes, the assaults, and all the rest of it—as the work never stops.

So too do the killings of cops as others are also murdered by a “cop hater.” Someone is targeting cops and has to be found and stopped.

While a little dated in spots, after all it was published in 1956, Cop Hater: An 87th Precinct Novel by Ed McBain is a solidly good read. The weather and the city are each their own characters as are the various folks in the tale. A solidly good read that lays the foundation for many books to come.