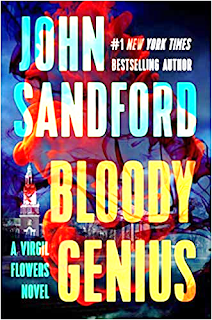 Mystery readers know John Sandford as the creator of the memorable Prey series with Lucas Davenport, a Minneapolis police detective, in the lead role in 31 books. Sandford is the pseudonym of John Roswell Camp, an American author and journalist. Camp won the Pulitzer Prize in journalism in 1986, and was one of four finalists for the prize in 1980. He also won the Distinguished Writing Award of the American Society of Newspaper Editors in 1985. In addition to his long-running Davenport series, he created a spin-off with one of Davenport’s subordinates named Virgil Flowers, an often-married smart aleck in the Minnesota Bureau of Criminal Apprehension. Davenport and Flowers join forces in Sandford’s latest, Ocean Prey (Putnam, 2021).

The twelfth book with Flowers as the primary detective is Bloody Genius (Putnam, 2019). When a well-known doctor and researcher is found bludgeoned to death in his library study carrel at the University of Minnesota, the Minneapolis police turned out in full force. After two weeks and no arrests, the victim’s wealthy sister called the governor, who believed his elevation to the governorship from district attorney was due in part to Flowers’ work in Deadline (Putnam, 2014), possibly my favorite of the series, and the governor pulled strings to have Flowers assigned to the case.

The first hurdle for Flowers to overcome was the hostility of the Minneapolis police, who deeply resented his presence, then he sorted through the public feud the late doctor had had with the chair of another department at the University. At one meeting, violence between the supporters of the two had broken out and everyone present had to be evaluated as possible suspects. The discovery of a small supply of cocaine in a secret compartment of the doctor’s home office took the investigation in a completely different direction. One lead after another appeared in a lengthy investigation full of surprises. That Flowers’ long-time girlfriend was expecting the birth of their twins any day made him extremely anxious to wrap the case up so he could go home.

Intricately plotted with more suspects than I remember in other books in the series. Indirect jabs at the U.S. health care system are woven in, as medical malpractice suits are discussed and the cost of providing home hospice care comes up a couple of times. Flowers is the most likable of Sandford’s many characters and he continues to deliver equal parts of charm and competence in this book. Starred reviews from Booklist and Library Journal.

I "think" I wrote the LJ review. Hard to remember, and when I checked, Amazon only says, "Library Journal". I love Virgil's adventures. He is the most likeable of Sandford's lead characters. You're right, Aubrey.