Review: Dead of Winter: A Novel by Stephen Mack Jones 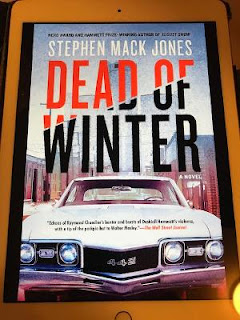 Dead of Winter: A Novel by Stephen Mack Jones reflects the way things are changing in local neighborhoods all across the United States. Places that were ignored for years and residents were left to fend for themselves are now the cool place to be and rehabbers and others are snapping up properties. Some homes are rehabbed and put back on the market for double or more the purchase price. In other cases, long time neighborhood fixtures are purchased, bulldozed, and replace with whatever is trendy at the moment.

That is apparently the fate in mind of some for Authentico foods owned by Mr. Ochoa in Mexicantown. What started as a mom-and-pop small store front grew over the decades into a major supply house for the Midwest that catered to restaurants and more. The recipes for tortillas, salsas, and queso came from Ochoa family who never forgot they were part of the neighborhood. In good times and very bad times, Authentico Foods and the Ochoa family took care of their neighbors. Mr. Snow's mom worked for him and rose up the ranks at the company. So, when Mr. Ochoa wants a meeting with August Snow, his mom passes the word, and the former cop goes to the meeting.

Mr. Ochoa is dying thanks to cancer and is trying to make things right for folks after he passes. He wants Snow to buy the company. While Snow could do so because of the settlement with the city of Detroit that paid him millions, he does not know a thing about running such a company. He does not want to buy the company, but as the meeting continues it becomes clear that Mr. Ochoa is in a squeeze and not just because of the cancer.

Some sort of real estate speculator who only goes by “Mr. Sloan” is pushing hard for him to sell. Allegedly he is working on behalf of the wealthy Vic Bronson who made his fortune in adjustable-rate mortgages and balloon payments when the housing market was crazy two decades ago. Apparently, the plan is fire everyone, demolish the place, and build some sort of ethnic mall with all the culturally appropriated trappings, put some high-end apartments on the floor above the shops, and slap a cheesy name on the place. All Mr. Ochoa wants is to protect what he has built and keep his workers employed so they have jobs after he dies. To make that happen, he is willing to sell the company for a lot less money.

Snow is still very reluctant to get involved until he learns that as part of the initial negotiating offer by Sloan, a piece of blackmail was given to the family. The loan shark and a few other things, Marcus “Duke” Ducane, is involved. Many decades ago, Mr. Ochoa had business dealings with him. The involvement of Duke Ducane makes things very personal as Snow put an end to his criminal enterprise as a young Detroit cop. Duke did five years at a minimum-security prison, got out, and now runs a high-end recording studio in a Detroit Suburb. The business is supposedly legit. In Snow’s mind, it is probably more likely to be crooked and better hidden thanks to Duke Ducane’s time inside with his companions from the banking and investment world.

A visit by Snow to Duke Ducane as well as some other activities soon results in a counter response and things quickly escalate in Dead of Winter: A Novel by Stephen Mack Jones.

Social commentary has always been part of the fabric of the series. Some of the fact-based societal observations in this fast-moving mystery read are sure to tick off some folks. They may even stop some folks from reading the book. That would be a shame as, if they do, they will miss a very enjoyable and intense read that features a complicated mystery and more. While there are references to earlier events in the preceding books, those references are fairly brief in nature and background, thus making this book one could easily read if new to the series.

Dead of Winter: A Novel, as are the preceding books, is highly recommended.

The preceding books and my reviews:

While I was on hold for the print copy, the eBook version became available at my local library system. Once again, Scott made the magic happen and got technology to work for this reader.

Nice review. I have to begin with August Snow, I think, but this one appeals to me.

It would be best to read in order, Patti. It is a very good series, in my opinion.