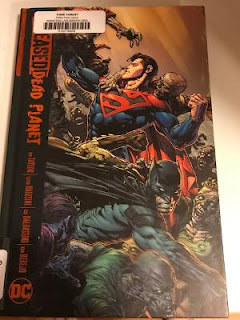 DCeased Dead Planet by Tom Taylor is set up five years after the events of the first book, DCeased.  The new Justice League has setup on a new planet that they have named Earth-2 and things are as well as can be expected after losing so many lives. The Super Sons (the sons of Batman and Superman respectively) have become the new Batman and Superman. Cassie Sandsmark (Wonder Woman's apprentice) has become the new Wonder Woman alongside surviving heroes like Mera, Black Canary, Green Arrow, Black Lighting, Hawkgirl, and more. They have no plans to return to the old Earth until a distress call from Cyborg is heard on Earth-2. The new Justice League decides to return to the old earth with the hope of saving their friend.

What they don't know is Cyborg discovered that there was a way to turn the infected back to who they were just before his head was ripped from his body by the infected Wonder Woman (Diana). Now just a head, cries out for someone to answer his call. Of course, the mission goes off the rails immediately. 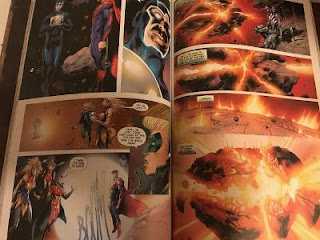 Featuring the remaining survivors who have created their own superhero team featuring John Constantine, Detective Chimp (a sentient monkey who dresses like Sherlock Holmes and solves crimes), Red Hood, Zatanna (a witch) and others have made a relatively safe haven for the survivors on the old Earth. Once the Cyborg situation is addressed, these heroes of old Earth will unite with the heroes of Earth-2 to face the ongoing threat from the infected as well as other new dangers.

Tom Taylor has created another excellent installment of this Elseworld series.  The sons have clearly grown into their new roles and are fun characters in their own right. This book is well written and features beautiful artwork. Some characters are given the spotlight more than others, but considering there are more than twenty plus heroes, it is difficult for any writer to give everyone a spotlighted situation. As a result, some characters like Hawkgirl and Black Lightning are unfortunately reduced to background characters that do not even have dialogue. 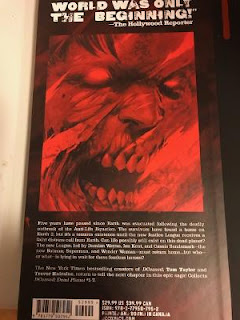 A couple of plot points are left dangling for the next installment which was annoying for this reader. Currently, the next book has yet to be announced, but considering the success of this series, it seems clear that there will be another installment. Some readers will also be annoyed, as I was, by the plot induced stupidity that requires intelligent characters to act in stupid ways. In this case, it was the equivalent of going alone and unarmed to the long-abandoned warehouse at two in the morning for a meeting that you have told no one about and left no record of what you are doing behind.

Despite those flaws, I highly enjoyed DCeased Dead Planet by Tom Taylor. While not quite as good as the original book, it is still very good. If not already clear, this is a series that builds on itself and should definitely be read in order.

The books and my reviews are:

DCeased Dead Planet (You are here and surrounded)

My reading copy came from the Park Forest Branch of the Dallas Public Library System.