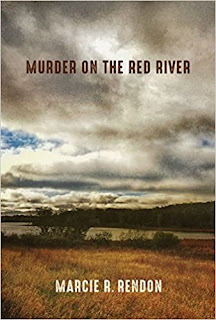 Marcie Rendon lives in Minnesota and is a member of the White Earth Anishinabe Nation. She is a playwright and author of both nonfiction and fiction. She is mentioned on Oprah Magazine’s 2020 List of 31 Native American Authors To Read. Her second mystery was nominated for the Mystery Writers of America’s 2020 Sue Grafton Memorial Award. Her first mystery Murder on the Red River (Cinco Puntos Press, 2017) won the Pinckley Women’s Debut Crime Novel Award in 2018 and was shortlisted for the 2018 Western Writers of America Spur Contemporary Novel Award.

Set along the Red River, which creates the Minnesota and North Dakota border, in the early 1970s, this book is as much a story of the abuse of Native American children as it is a conventional mystery. Renee Blackbear was taken away from her mother as a toddler and lived in a succession of white foster homes. When she was eleven years old her foster mother sent her to work in the crop fields. A farm laborer she remained, shooting pool at night and on weekends for extra funds. Her laser-like focus on earning money resulted in the nickname of Cash.

Her only support system was the county sheriff who always looked out for her, starting from the time he removed her from the auto her drunken mother had wrecked. When a farm laborer is found stabbed to death in the county, the sheriff asks her if she can learn the name of the Native American victim. Her investigation takes her to the Red Lake Reservation, more than 100 miles north, where she finds the dead man’s wife and children waiting for his return.

Who killed a harmless itinerant agricultural worker and why occupies Cash’s mind when she’s not in the wheat fields or winning pool tournaments or listening to the sheriff try to convince her to enroll in college. The daily news broadcasts about the Vietnam Conflict from the televisions in the bars Cash visits firmly set the timeframe.

The shameful practice of separating minority children from their parents did not start along the Mexico-United States border. It went on a long time before that in populations of Native Americans. This book relates the details of the mistreatment and substandard education of these children while it rolls out a competent whodunit. Especially for mystery fans looking for more ethnic diversity in their reading.