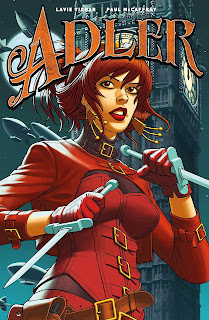 An arresting cover featuring a woman in red wielding two long daggers with Big Ben and zeppelins in the background was enough to make me pause and pick up this book.  The title helped as well, as I immediately assumed (correctly, as it turned out) that the woman in question was Irene Adler, “The Woman” to Sherlock Holmes.

She’s joined by other heroines to form the League of Extraordinary Gentlewomen, and are immediately plunged into a web of intrigue.  Marie Curie has important papers that need to be delivered but there are dark and menacing forces who are intent on intercepting them for nefarious purposes.  Some of those names are familiar as well, such as Moriarty.

This edition collects all five issues of the individual comics to make one story.  The art is very nice to look at, with good use of color and beautiful details. I have to say that there do tend to be scantily clad big chested women wandering around throughout the book which was a bit off-putting for me. (Also I kept wondering if they were freezing.) At least it seemed to have been toned down a little from some of preliminary drawings.   Having just seen the movie Black Widow, I guess I expected better but comic book conventions die hard.

Adler is a fast-paced adventure which also enjoys name-dropping both real and fictional characters into the mix—Jane Eyre, Lady Havisham, Dr. Tesla, Camilla, etc.—and has a bit of a steampunk feel to it. There are a few inside jokes but I won’t give examples because I love a good inside joke and I am disappointed when someone spoils it before I have a chance to spot it.

While not a new concept by any means, I still found a few twists along the way that enlivened the proceedings.  Irene does some very Holmesian turns, especially at their first meeting when she pronounces that Jane has just come from Boer War in a mirror image of the first meeting between Holmes and Watson. It was cute in a way, but in another way I would have liked to have seen these two be their own persons, not just feminine versions of male characters.   Besides, this scene is pretty standard for most Sherlock Holmes bits, so it’s pretty much been done to death unless there is something else going on.  I have a specific example in mind but I won’t reveal it because it’s a delicious twist pivotal to that story.  This one isn’t.

It was fun but not compelling. There were some good moments. My criticisms are more because it could have really risen above and instead from my point of view, it took the conventional route. On the other hand, I guess I am reviewing it for the book I wanted, not the book that it is.  Mea culpa.

If another series is done, I’ll read it—but I’m not anxiously awaiting it.