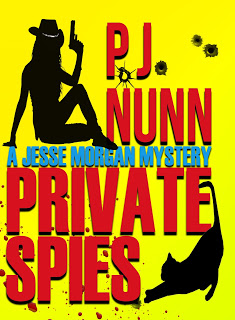 34 year old Jesse Morgan Jackson is not having a good year. Her mom says that since Jesse has always done things early she is just having a mid-life crisis. Jesse would not agree, but the past month has been especially difficult with the death of her best friend and business partner, Joey Catronio.

Five years ago they formed a partnership with Joey doing the street stuff and Jesse doing the computer stuff in the office. With his sudden death, Jesse is struggling personally and professionally. She's determined to keep the business going, but she doesn't truly know what she is doing. The bills are mounting and she isn't about to go back to retail or lose their secretary Bernice her job. So, when Beverly Gafford calls looking for somebody to find her ex-husband, Lawrence James Gafford, Jesse works hard to land what clearly is going to be a difficult client.

After a lot of questions, it gradually comes out that supposedly Lawrence Gafford never came back with their daughter after his visitation weekend was over. Beverly knows next to nothing about her ex these days and makes it clear that she likes it that way. Getting any information out of her is very difficult and she just expects her daughter to be found at the snap of her fingers with no effort on her part. It becomes clear that Beverly is more trouble than Jesse needs right now, but she desperately needs the money and takes the case. A case that threatens to overwhelm her from the start.

Fortunately, before his death, Joey had hired on an experienced investigator by the name of Byron Montgomery. Unfortunately, he never told Jesse about that so she is very surprised when Bryon shows up ready to begin work. The former Houston police officer brings plenty of experience and has an employment contract. He is also easy on the eyes and it has been awhile for Jesse. The attraction is definitely there on her part and she suspects the feeling might be mutual.

Not that she has time for much of any romance in or out of the office with what will happen in this confusing and complicated case. A case that will take Jesse all across North Texas and deep into Oklahoma on a trail full of dead ends and misdirection. If that wasn't enough, she still has to show up for dinner at Mom and Dad's house. At least there isn't a grandmother to shoot dinner.

Reminiscent of Janet Evanovich’s long running Stephanie Plum series, Private Spies: A Jesse Morgan Mystery is highly entertaining and occasionally laugh out loud funny. The slowness of the pace at the beginning provides the author time to develop the Jesse Morgan character for readers before the action significantly intensifies on many fronts. Published under the author's own name and though her publicity company, “Breakthrough Promotions,” this debut novel of the series is a complicated and well-done effort from start to finish.

E-Book (also available as a paperback)

Material was picked up during the author’s recent free read promotion in conjunction with the release of her novel Angel Killer from Oak Tree Press. While I do consider PJ Nunn a friend and recently offered her a spot to guest blog here, I had no idea prior to publication she was working on a book or books. I provided zero editorial assistance on her novels and therefore felt comfortable reviewing this book.