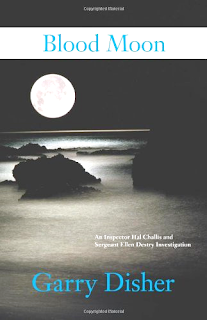 Garry Disher has published over 50 widely translated books in a range of genres: crime thrillers, literary novels, short-story collections, YA/children’s novels, and writers’ handbooks. His awards include the Ned Kelly Lifetime Achievement Award in 2018; the Ned Kelly Award for Crime Fiction in 2007, 2010, and 2021; the Crime Novel of the Year, Germany in 2020; and German Crime Fiction Award in 2002 and 2016.

His series characters include Wyatt, a Melbourne career criminal, in nine books so far and the Peninsula Crimes police procedural series with Inspector Hal Challis and Sergeant Ellen Destry in seven books set in Waterloo, Queensland. In the fifth Challis outing, Blood Moon (Soho Crime, 2009) the team has two major crimes to solve. The first is the brutal attack on the chaplain of a private school. The chaplain turns out to be greatly disliked, with good reason, and the police have a number of suspects to check out.

The chaplain’s case slips in priority when the disappearance of a woman who was responsible for enforcing land use regulations culminates in the discovery of her badly beaten body. A historic house was razed just as a preservation court order was being processed, angering the building protectors and resulting in a confrontation. The police wonder if she got caught in the middle somehow. The victim suspected that someone in her office was slipping the property developers advance information about preservation orders, which would be a violation of their position of trust. She had begun saying to her friends that she should request an investigation. Feelings for and against development are running high in the area, and Challis and his team have to wade in.

On the personal front Challis and Destry are living together in defiance of rules against fraternization. When their boss finds out, Challis fears one of them will be sent across the continent to separate them. Their subordinates are pairing up too, creating friction.

Disher can’t write a bad mystery. The plot neatly weaves the professional and personal threads together and incorporates enough twists to keep the reader alert. The police team members are especially well done. Each detective has his own investigative strength, and each one is given a moment to shine in this ensemble story. I noticed the slang that had me consulting Google in the Wyatt books is missing here. Recommended, particularly for fans of police procedurals.

You're right. I haven't read a lot of Gary Disher, but I don't believe he can write a bad book.