Scott's Take: Behind The Throne: The Indranan War: Book 1 by K. B. Wagers 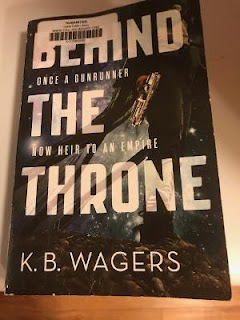 Behind The Throne: The Indranan War: Book 1 by K. B. Wagers revolves around a former princess who became a gunrunner and now must return home to become the heir and future empress. She never wanted to come back home, but with most of the royal family killed in a series of attacks, it is time for her to return to the role she was born for—ruler of the Indranan Empire. Though, based on the first chapter, she may not live long enough to so as somebody wants to take over and is happy to spill her blood to do so.

This science fiction book set far into the future has Earth references and connections, but Earth is not a focus. Gender politics are reversed and women hold much more power in the society than men. The citizens of the Indranan Empire worship the Hindu gods and are involved in a non-official war with the Saxons. The main character is a sarcastic woman named Hail Bristol who is to be the future Empress. She never wanted the job, but is not about to abandon her people to those who would take her place. She is a complex and emotional character whose instincts tend towards the violent side. Not that there is anything wrong with that as sometimes violence is the answer. 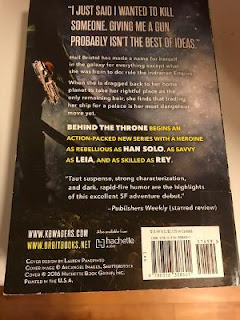 An obvious negative in the book was the fact that despite the main character being a former gunrunner, the author never considered the implications of providing weapons to others and being potentially responsible for what they do with those weapons.  Even though it becomes clear to the reader that the former gunrunner may have inadvertently supplied the weapons that were used to kill her family members, as well as to nearly kill her, this angle is completely ignored. In fact, the author made sure to keep her rather clean for a gunrunner. Allegedly, she never was really bad and never supplied weapons that killed innocents and, though she is very feared by some, she never did much wrong. The idea is that the main character was able to stay relatively in the gray despite being a criminal and never went too far into the black.

Behind The Throne: The Indranan War: Book 1 by K. B. Wagers is a fun, violent, humor packed read with plenty of intrigue and politics throughout. There is a lot of character development and plenty of relationships evolve throughout the novel. It is a rather dark and mature read that includes suicide, various forms of murder, bioweapons, and a number of children are killed quite horribly. Book Two in the series, After The Crown is here from my local library system.

Behind The Throne: The Indranan War: Book 1