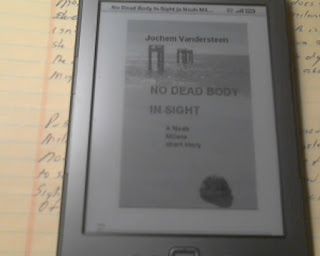 The elderly Ms. Albert is not being taken seriously by the police or anyone else because she claims to have found a dead body. She is sure the body was of a dead man, and that he had been shot in the stomach. Unfortunately, by the time she left the beach and returned with the police, the body was gone with no sign of anything. She wants Noah to find out what happened to the body.

She certainly seems to have her wits about her and Noah likes her and believes that she believes she really did see a dead body. Thanks to her legendary film producer husband, she does have the money to pay security specialist Noah Milano’s fee which means money isn’t the issue. A rare thing indeed with Noah’s clients. Noah isn’t sure he can really help her nor does he have a really good idea how to proceed as this is not the normal type of case he deals with on a daily basis. Still, she is adamant and something probably happened. He reluctantly begins to dig into the case and before long has an idea or two about what might have happened.

Published in 2012 this is another fast moving Noah Milano tale. Son of a legendary Los Angeles gangster, Noah knows how to work both sides of the street to solve cases. A fast and pleasant read, No Dead Body in Sight: A Noah Milano Short Story by Jochem Vandersteen, packs a couple of surprises along the way.

No Dead Body in Sight: A Noah Milano Short Story

Purchased using funds in my Amazon Associate Account to read and review.