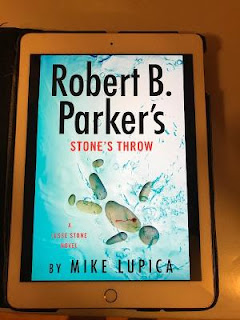 Robert B. Parker's Stone's Throw: A Jesse Stone Novel by Mike Lupica finds Jesse Stone missing drinking as well as Sunny Randall. They are in a relationship time out and she is out in Los Angeles working a case. That means she is far from home and working for an old boyfriend, Tony Gault. He is some sort of Hollywood talent agent and hired her to deal with a problem. That case and his presence are not why they are in a relationships time out, but it certainly does not help matters.

One of the ways Jesse keeps drinking at bay is by going for long walks. As the book begins in earnest, Paradise Police Chief Jesse Stone is on one of those late evening walks. This night he has walked over to an area of land known as “The Throw.” It is the last big piece of beachfront property in the area and is up for sale by Thomas Lawton III.  The sale has caused massive controversy locally and is being fought over by two very rich men who have their own designs for how they will develop the property once the Board of Selectmen approve the sale. Billy Singer, a guy out of Vegas, and Boston based, Ed Barron, have competing plans to build a casino and a hotel on the property.

While the rich have been battling it out in public and on the airwaves with their competing golden promises, some local opposition has come about from folks who have environmental and other concerns. The opposition are underdogs as the rich guys, as they always do, are promising a massive boost to the local economy that has been ravaged by Covid-19 as well as a lot of new jobs. Some in the opposition have resorted to a sort of guerrilla tactic of digging graves and placing ironic tombstones n the fresh grave each time. It happens every so often and at random intervals which makes it hard to catch the people doing it.

Not that Chief Jesse Stone is much worried about it. The current property owner is irate each time it happens, but in the big scheme of things and the fact the land is soon to be ripped apart by bug tractors and the like, it does not really matter.

So, his only concern when he sees evidence of a new shallow grave is the fact that Lawton will be in his office loudly complaining yet again. That would have been preferable to what Jesse actually finds at the new grave. Instead of another empty one, he finds his friend and the Paradise mayor, Neil O' Hara, very much dead by way of an apparent suicide.

Of course, it isn't a suicide for several reasons soon explained. The questions of who did it and why are ones of many that have to be answered in Robert B. Parker's: A Jesse Stone Novel by Mike Lupica.

Fast moving with short chapters and a brevity of dialogue and scene details, the book is an okay fast read. It hits all the usual touchstones regarding local and distantly located characters and keeps action front and center. A lightweight and simplistic read that serves as a pleasant enough multi hour diversionary escape despite the fact there is no new ground here and even the final twist is rather expected. The estate really should have stayed with Reed Farrel Coleman for these books. It would have been way better.

My reading copy, in eBook format, came courtesy of the Dallas Public Library System. As always, Scott provided the technical assistance needed to get it up and working on my iPad.