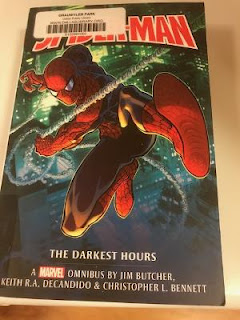 Spider-Man: The Darkest Hours Omnibus by Jim Butcher, Keith R. A. Decandido, and Christopher L. Bennett is a three-book set that includes the novels, The Darkest Hours, Down these Mean Streets, and Drowned in Thunder. Each novel was originally printed in the early 2000s and therefore each one is set in that time period and follows the conventions of the Spider-Man universe at that time.

The first book and my favorite of this collection, The Darkest Hours, features Spider-Man and the Black Cat trying to stop The Ancients (relatives of the fearsome Morlun) from eating Spider-man. Anyone who has read anything involving the Spider-Man foe known as Morlun is well aware that is one of the most dangerous foes and is also aware that his relatives are just as dangerous. For those unfamiliar with Morlun, he is a monster that looks like a normal man in appearance, but is incredibly powerful and has no regard for human life at all. His primary goal is to eat Spider-Man and others who are inspired by animals (usually called totems) so that he can gather their life force and uses it as strength. His family is just as bad.

There are references to earlier stories and those references are very detailed in this read. Those other stories introduced magic as an element in the origin of how Spider-Man got bitten. Basically, the idea was that a magical Spider (a totem) was connected to the web of life of which all reality was connected and multiple people in the Multiverse were bitten and thus chosen to defend their particular point of reality. On the primary Earth in the Multiverse, the Spider choose Peter Parker.  It is ambiguous during this era how much Spider-Man’s powers were derived from science or magic.

In the second book, Down These Mean Streets, Spider-Man teams up with the NYPD to stop the proliferation of a dangerous new drug which not only makes you high, it also gives you temporary superpowers. While adults do use the drug, it is mainly being sold to the youth. This is a far more straightforward read than the proceeding book. It is also a far more depressing read as well as not all the kids who are exposed to the dangerous drug survive. 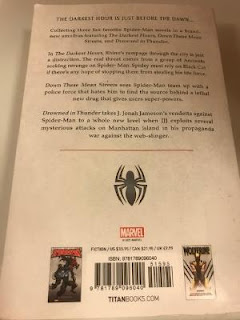 Drowned in Thunder has Spider-Man and J. Jonah Jameson engaged in a media war after a series of robot attacks happen in New York City. Each is blaming the other for being behind the attacks. Clearly, Spider-Man is not responsible. But, is J. Jonah Jameson responsible? This book was also more straightforward than the first book.

All three Spider-Man stories are full of humor and action and are good reads set in the status quo of the early 2000s as depicted in the comics. That means Spider-man is married to Marry Jane, Aunt May knows he is Spider-Man, and Peter Parker is a High School teacher teaching Science. These facts play prominent roles in these stories.

The last two books in the collection each have a manor focus on real life issues. Racism, drug use, and being born in poverty guide your life choices is a major theme of the second book while fake news, disinformation and personal bias make up a major portion of the third book. At times, in both books, things get a bit preachy as nothing subtle at all. Both books have a far more reflective tone than the first book, The Darkest Hours.

The Darkest Hours was my favorite and was full of action and humor. The tale also includes Dr. Strange. I very much enjoy the interactions between Dr. Strange and Spiderman which often became very funny.

All three books have a wide and changeable cast of characters outside of the those listed above. They are set in the same time sequence as ordered in the collection. The villains are very different in each book. The writing styles and prose are unique for each book where each author manages to create their own unique Peter Parker while staying consistent with his character.

These stories hold up surprising well despite their age. These books are for more mature readers and not for kids. The usual trigger warnings for this type of adult oriented comics and novels apply here and are in terms of drug use, suicide, death of children, excessive and detailed violence, and more.

I highly recommend this collection.

My reading copy came from the Grauwyler Park of the Dallas Public Library System.