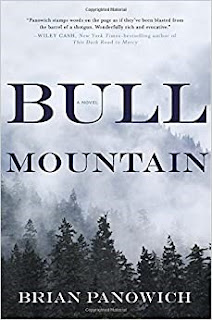 Bull Mountain (G.P. Putnam’s Sons, 2015) is Brian Panowich’s blockbuster debut. The book won the 2016 Thriller Award for Best First Novel and the Southern Book Prize for Best Mystery. It was shortlisted for the Barry Award, the Anthony Award, The Georgia Townsend Book Prize, and the LA Times Book Prize. It was also selected for the 2016 Books All Georgians Should Read list by the Georgia Center of the Book. Its sequel Like Lions (Minotaur, 2019) is considered equally good, if not better.

Set in northern Georgia, this is the story of three generations of the Burroughs crime family who own most of Bull Mountain, where they make a living from producing and distributing first moonshine, then marijuana, and finally methamphetamine.

The entire family is involved in its illicit enterprises. They view themselves as a unit separate and apart from the rest of the world. “Family” is a word that crops up often, starting with the first chapter in 1949 and carrying through to the end. Deciding to work with a gun-running outfit in Florida was a big step; outsiders had long been viewed with suspicion. Echoes of the Corleones in The Godfather resonate in the background.

Finally in the third generation, Clayton Burroughs walks away from the family organization. Similar to the network television series Justified, where Raylan Givens enters law enforcement to separate himself from his career criminal father, Clayton Burroughs becomes the local sheriff, mostly to earn an honest living to please the woman he wanted to marry. He makes no attempt to enforce the law on Bull Mountain, even if state and Federal authorities stage occasional raids. Eventually an FBI agent approaches him with a plan to close the Burroughs’ lawless activities down for good and Clayton agrees to try it.

It is hard to say much about this book without giving away essential plot elements. Shockingly violent and brutal, the story is riveting from the first pages. I read it through in one sitting. I did find the disjointed chronology disruptive; the chapters move back and forth from 1949 to 2015 and points in between. I sometimes had to stop reading to check the chapter heading to orient myself.

An incredibly good book and an intriguing contribution to contemporary Southern fiction. Fans of Justified, the Colson Quinn stories by Ace Atkins, or the Wolfe crime family books by James Carlos Blake will likely enjoy this series.