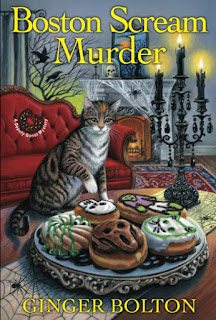 Things are getting spooky at Emily Westhill’s donut shop.  In honor of Halloween, she’s come up with some sweet creepy treats like Boston Scream Donuts and Jack o’ Lantern donuts. Both seem to be making a good impression with customers, with the exception of a man from Boston who is more fixated on extolling the virtues of his city than on appreciating what’s before him.  Still, he does ask Emily to make him donuts for his upcoming birthday party and asks her to consult on redecorating his guest cottage.  She agrees, but gets more than she bargained for when she arrives at his house and find him dead.

This fourth entry in the series brings back all our old friends in an engaging mystery.  It’s definitely a cozy and has the near-regulation semi-romance going on.  Emily is still resisting falling in love with police officer Brent, who was her late husband’s best friend and partner.  Deputy Donut the cat is still adorable, and the supporting cast is still supportive.  I did find some of the donut-making descriptions to be skippable, but the book still held my interest.

I found the early part of the mystery to be a bit contrived, but past that it settles into a good yarn.  As is also near-regulation, Emily takes some dubious chances but to the author’s credit she doesn’t use these to make her heroine look too foolhardy.  Parts of the story involves kayaking, and there is some excellent description of how it feels to be out alone on a lake, with the mists rising. I’m a non-kayaker but she made it sound like something I might want to try some day.

Overall, a solid entry in the series. I do wish the relationship between Emily and Brent would move forward, though. 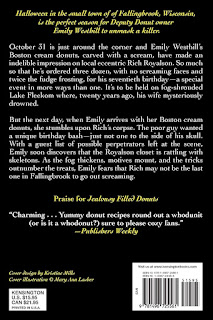 Survival of the Fritters

Beyond a Reasonable Donut