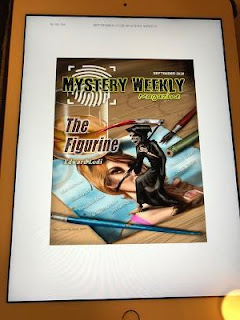 Mystery Weekly Magazine: September 2020 opens with “Cult of Personality” by Nick Legrand. John Fielding has a job interview with Mr. Roger Martin Mathis of the billboards and the giant smiling face with tag line, “WE’LL GET HIM FOR YOU!” A lot is riding on this interview and Mr. Fielding is feeling the stress from long before he finally walked into the marble floored lobby of the building on the way to his scheduled appointment. How the interview went and the repercussions of that are detailed in this increasingly surreal story.

The story that inspired the cover art comes next with “The Figurine” by Edward Hodi. After wandering the streets and purchasing some sort of small figurine, the narrator went home and crashed on the couch. Eventually, hours later, he got up, took the figurine and looked at it. He had purchased a small figurine of the Grim Reaper and pretty much has very little memory of doing so. He placed the figurine on top of the newspaper and as it happens, right on the picture of some guy on the front page of the paper. He goes about his business and discovers the next day that the figurine has quite the power.

After two surreal and weird tales, the mere straightforward mystery, “Golden Lives” by Joseph S. Walker is a breath of fresh air. Private Annalee Lincoln is met by Police Officer Whitney Lewis upon arrival at the airport in Sacramento. Her brother Ike is dead and she is home looking for answers. Though it has been only three days he has already been cremated. Ike died during the commission of a crime, but Annalee does not believe it and launches her own investigation to figure out what actually happened that fateful night and why. This reader hopes that we will see more of Officer Lewis and Annalee Lincoln in stories to come.

Samuel Sharpe and Bartholomew Blunt return with another interesting tale in “The Case Of The Red Ribbons” by Benjamin Mark.  Captain Elias Young has a complicated case of missing diamonds and more. Fortunately, he can put his two best detectives on it and have Sharpe and Blunt solve it all.

“Two Taxis” by William Burton McCormick is next where readers are taken to a resort town on the Mediterranean. Things go wrong at the hotel and it is not really the fault of Jean-Paul fault through Monsieur Rault is going to blame him for everything. Things escalate quickly in this complicated and enjoyable tale.

Detectives James Alonquin Mendelsohn, known to many as “Jam” and his partner Detective Sammie Aku have a murder to solve outside “Kitty’s Kats: Exotic Dancers.” The dead woman is posed in the same way as the figure on the overhead sign advertising to one and all what goes on inside if the name of the business did not already make things very clear. That body outside the club is the first case in “Neon Nights” by Shea E. Butler and the proverbial tip of the iceberg.

Skipping between current events and a work in progress is “Never Kidnap A Crime Novelist” by Stan Dryer. Fiction and the real world collide in a complicated tale that can not be explained at all without ruining the read.

The “You-Solve-It” this month is “An Oldie But A Goodie” by Eric B. Ruark. Sheriff Tracy Hyers is back in the neighborhood looking for the escaped canine terrorist, Horace. It is time to once again talk to the owner, Lydia Monroe, about her dog. It should have been simple. It wasn't.

The solution to the august 2020 puzzle “A Number's Game” by Bruce Harris brings this issue to a close.

Mystery Weekly Magazine: September 2020 is another enjoyable read. A bit more surreal than most issues but still a solidly good read. Complex plots and characters in tales with no easy solutions make for another good issue.