Review: A Good Day For Chardonnay: A Novel by Darynda Jones 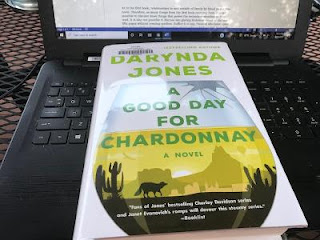 A Good Day For Chardonnay: A Novel by Darynda Jones is the second read in the series that began in A Bad Day For Sunshine. It was in that book that readers were introduced to the quirky town of Del Sol, the newly elected sheriff Sunshine Vicram, and her family. While some things were resolved in that book, one major thing was not, and that continues here in a secondary story line.

One of several secondary storylines in a complicated and occasionally a laugh out loud read. In the main storyline, Levi Ravinder is involved in a serious altercation in the parking lot of the Roadhouse Bar and Grill. To say that Sunshine and Levi have history is to say the sun and the desert have a history. This night Levi was trying to stop three men who were beating and stabbing Keith Seabright. What Seabright was doing at the place, what his connection with Levi is, who the three men are, and other questions are questions she needs official answers to as fast as possible. All she knows for sure, based on what Levi is saying is that he is military of some type and had to drugged to be losing to his three assailants. Instead of going to the hospital as the clearly injured Levi should, he soon escapes custody and disappears into the night. Presumably headed north in pursuit of the three who left the scene in a truck.

As in the first book, relationships in and outside of family power this novel. Therefore, as many things from the first book continue here, it is not possible to discuss those things that drive forward the secondary storylines in this read.

Along the same vein, it is also not possible to discuss two glaring technical errors in the last fifty pages without creating spoilers. Suffice it to say, those of who have spent time in hospitals or know a thing or two about police vehicles, might be briefly and annoying jolted out of the world of the book.

That being said, this is a funny read that reminds this reviewer of the Sheriff Brady series by J.A. Jance with a lot more humor. This read also has a multi-page and graphic sex scene between two characters that may be too much for some readers. One did expect the romantic moment though this reader did not expect the graphic detail of the event. The read also has plenty of action, violence, misdirection, and mystery.

All in all, A Good Day for Chardonnay is a good read and ties up the primary storyline and several ongoing issues from the first book quite well.

A Good Day For Chardonnay: A Novel

My reading copy came from the Skyline Branch of the Dallas Public Library System.