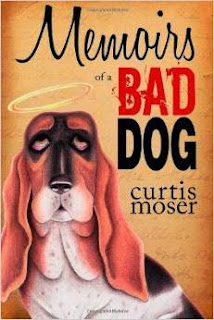 This is not an easy book to review because it contains so many surprises and unforeseeable turns, and I don’t want to reveal them and spoil the reader’s enjoyment. Suffice it to say, then, that for Bogart the basset hound, who narrates the story, what starts out as a lark results in a tragedy, leaving him with a corrosive sense of guilt and a desperate need to redeem himself.

Certain that his human, whom he calls Swifty, knows what he did and is deeply upset  about it, Bogart sets out with his border collie girlfriend Ginger to retrieve an important item, the return of which he hopes will somewhat mollify Swifty. When things go awry, Ginger herself is thrust into mortal danger, and Bogart knows that only he has a chance of saving her. Teaming up with a cat named Snowball, he sets out to do just that. Things do not go smoothly. In fact, Bogart’s dual quests get him into still deeper trouble, both physical and emotional, intensifying his guilt.

Written in a breezy style, with plenty of moments that will have readers smiling and even chuckling aloud, Memoirs of a Bad Dog, though obviously very much an adventurous  fantasy, touches on some serious actualities, often prompting Bogart to sober reflections—e.g., “Great cosmic scales. They’re somewhere balancing everything out; I just know it. Everything has an opposite—black and white, good and evil, happiness and sorrow. Even you can see that. It’s because everything has to be balanced. That’s the greatest secret I know.”

Two caveats. First, I read the novel in the Kindle edition and found more than a few grammatical errors I don’t believe are meant to be intentional aspects of characterization. For instance: “I wonder if I would have been a good enough dog to broadside the German shepherd as my father did, or if I would have went for the chicken.” (Italics mine.) Second, one of the issues the story deals with is dog fighting, and to do so it depicts some examples and their aftermaths. These are fairly brief, but they are rather graphic. I never had the feeling they were included for the sake of cheesy sensationalism, but I suspect many readers will probably find them hard to take if they‘re dog lovers like I am—and I doubt that readers who don‘t love or at least like dogs will bother to pick up this book.

Caveats notwithstanding, Memoirs of a Bad Dog is a very entertaining, thoughtful, and moving novel.