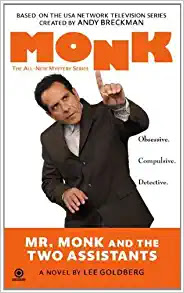 Hardcore “Monk” fans know the back story: Adrian Monk’s photojournalist wife Trudy was murdered in a car bombing by person or persons unknown. Devastated, Monk was nearly catatonic for the next three years. When he was released from the hospital, it was in the care of a nurse named Sharona Fleming, who functioned as both his nurse and assistant for the next several years. When Sharona remarried Trevor, the husband she’d previously divorced, and moved from San Francisco back to New Jersey, Monk hired Natalie Teeger as his new assistant.

So when, in Mr. Monk and the Two Assistants, Natalie’s daughter Julie breaks her wrist during a soccer game, necessitating a trip to the emergency room, both Natalie and Monk are stunned to see Sharona working there. Monk is ecstatic as he imagines both women in his life; Natalie feels threatened by the prospect of losing her job to Sharona.

It turns out that Trevor moved to Los Angeles after buying a landscaping company, and is now in jail, charged with murdering one of his clients. Convinced he’s guilty, Sharona would be happy to let him languish while she resumes working for Monk. Natalie wants Monk to prove Trevor innocent so Sharona will get back together with him, thus solidifying Natalie’s position as Monk’s sole assistant.

After Natalie takes it upon herself to visit Trevor, she persuades Monk to investigate. She, Sharona and Monk drive to L.A., a place Monk quickly learns to fear, to begin their probe of the events. There they meet, among others, bestselling mystery novelist Ian Ludlow, who frequently acts as a consultant to the LAPD.

When they return to San Francisco, Captain Stottlemeyer tells Monk, who’s a paid consultant to the SFPD, that he needs his help in the murder—on a nude beach, to Monk‘s chagrined horror—of one Ronald Webster, a shoe store clerk.

Eventually it becomes clear that the two apparently disparate cases are connected, and any veteran mystery reader will easily guess the identity of the culprit. Proving said culprit’s guilt is another matter entirely, because that person has cleverly and convincingly developed seemingly airtight cases against Sharona and Natalie as the perpetrators of the two murders.

This is the fourth of Lee Goldberg’s Monk novels that I’ve read. I’ve enjoyed all of them, but this one is the best to date, in no small measure because of its fairly-clued solution. The clue, I might point out, is kept in front of the reader throughout the book, but is nevertheless elusive—a sign of excellent authorial misdirection.