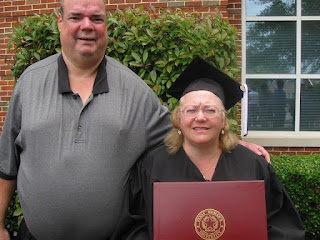 Four years ago today at 8:45 AM my world shattered and burned as Sandi moved on without me. Every single day since without her has been hard. Some days, like this one, are just brutal.

The picture is from May 15, 2010, which was her graduation day at TWU. She was back on her feet, had walked at graduation, and doing pretty well after collapsing while student teaching about two months prior to this day. She had been air ambulanced to Medical City Dallas Hospital where they determined she had several small strokes as well as some sort of heart attack,. While they could see damage on the MRI and the CT Scans, she never had the blood markers for either so they were sure she would be fine long term. We would learn over a year and half later that not having the blood markers was meaningless because you could be full of cancer and have no blood markers at all for it.

We would also learn that this event was probably a warning sign of cancer that was never caught or diagnosed. All we knew this day was she had graduated and had to pass the state boards to finally be cleared to teach. She had a classroom full of supplies and gear in storage and was so thrilled to have graduated. Sandi was worried that she might not pass the tests as she knew she was not the same person she was before this had happened. But, she was sure that given enough time, things would work out.

On this day, we had no idea what was to come. We thought the future was bright. The sun sure was as it kept busting through the overhead cloud cover. It happened to punch through and nailed us as the picture was taken all those years ago.