Sample Sunday: Excerpt: Under An Outlaw Moon: A Novel by Dietrich Kalteis 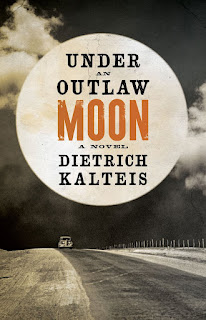 Please welcome back Dietrich Kalteis back to the blog today with an excerpt from his new book, Under An Outlaw Moon: A Novel.

In the eyes of men I am not just

But in your eyes, O life, I see justification

You have taught me that my path is right if I am true to you.

“Well, maybe you’d’a been wrong then, huh?” Said her name was Stella Mae Redenbaugh, looking at him like she saw something underneath his smile, this guy with the wavy hair, skating around the roller rink, looking at her now and then, finally coming over when she was alone next to the boards. Making a fast stop and showing his moves.

Stella knowing her friend Liz and the other girls were looking over from the concession stand, whispering and giggling to each other. Made her feel good, lying to him that she was sixteen.

“Older, like how much?” Crinkling her nose — Stella guessed it looked cute like when she practiced it in the mirror — smiling at him, liking the way this Johnny O’Malley was flirting with her, something no boy had done before. Not feeling that unease she often felt around men. Been that way since her real father just walked off, Stella thinking good riddance, happy her mother wouldn’t get hit and bruised anymore. Her stepfather, Lester, being made of better stuff, a quiet man working hard for the family. Maybe dull in that way, but at least the man didn’t leave those awful bruises on her mother.

Fifteen and Stella wasn’t sure what the look meant that Johnny D. O’Malley was putting on her, but she was thinking maybe she wouldn’t mind finding out.

“Well, I think you’re saying it just fine.” She liked the way his cheeks flushed then, yeah, starting to feel easier with him. Not tall, but a nice build and good looking with the blue eyes and wavy hair. Older by a mile, even if she had been eighteen. Stella liking the way Liz was watching from the refreshment stand, talking to some boys, the rest of the girls gone home.

Bennie Dickson had been feeding lines to the pretty blonde, this Stella Mae. Now he was getting caught up in it. Laid it on pretty thick, saying he was a prize fighter in training. That part was true, and Johnny O’Malley was the name he used when he stepped through the ropes.

Not sure why he used the name on her, the name the promotor had come up with, telling Bennie it gave him the Irish edge, a young fighter showing promise, along with a punishing right hook, something they could build on.

Bennie didn’t tell her anything about the trouble he’d been in, the stuff he got into back when his old man told him he was acting more loser than winner, anything but a Dickson man. Strike one coming for the stolen car, doing time in that reformatory and shaming the family. Bad Bennie not learning life the easy way, then taking a second swing when he got mixed up in the Missouri bank job, giving up six more hard years in the Missouri pen, same place they kept Pretty Boy Floyd, the place inmates called The Walls on account of that high gray limestone surrounding the place. Life’s lessons kicking Bennie hard that time. Working in the prison library and learning to box while inside. Finally convincing the parole board he got the message and wasn’t going to make the same mistakes, released into his father’s custody. Just turned twenty-six, and Bennie swore to go straight this time.

Might have been partly why he was feeling more Johnny than Bad Bennie right then, telling this girl about the job he just took driving a cab, the money he made allowing him to sweat and work the bag in the Hard Rock gym. Then switching the focus, telling her she skated like a pro.

“You been watching me, huh?”

“Admit I was.” From over by the boards, betting all the boys looked her way. From the corner of his eye now, he caught the three mutts eyeing him from over by the food stand, the ones chatting to Stella’s friend. The looks meant they guessed who he was and knew about the time he served. Thinking they were better and wanting to prove it. Bennie feeling glad his older brother Spencer had showed up at the rink today, two years older and born on the same day, the two of them of the same blood. Spencer known around town as a tough customer. And although the oldest of the three wasn’t there that day, the same went for Darwin, a reputation for watching out for his brothers, likely the main reasons the mutts were keeping their distance. Still, they had that look, like they had something to prove.

“Me, pffft, nobody sees me. Just a place I meet Liz and the girls and have a few laughs, is all.” Stella Mae thinking who had money for roller skating, a nickel just to get in the place, wondering again if Johnny meant what he said, that she looked eighteen, maybe older. Could be on account of the way she’d pulled her hair back that day, not wanting it in her eyes when she skated around, the sweater showing the promise of changes coming, and the ruby lipstick from her mother’s dressing table completing the picture. Liked her lips red like that, Stella doing it more these days when her mother was out of the house. Always wiped it off before she went back home. “How you like it, the music?” Johnny asked. Not sure what the number was piping from the speaker cone. Admitting to her he had a tin ear.

“This one’s Lionel Hampton, called ‘Hot Mallets.’ They play it all the time, everybody skating to it. One the girls like to dance to.”

“That right? Well, lucky for Lionel, how about it then, let’s see you do it. Dance or skate, either one.”

“Just ’cause you say so, huh?” Stella acting indifferent, the smile letting him know she was playing too.

“Just like to watch you move.” The blush in his cheeks betrayed him, and he pushed off the boards and skated around the rink, turning and going backwards, moving faster between and around the couples and singles, pretending he was doing it to the music, moving his hips and clowning, looking her way, smiling from across the rink. He swished around and grabbed hold of the boards next to her, saying, “So, come on, girl, catch up if you’re any good.” And he was off again, going around and looking to see that she was watching. “I’ve Got a Pocketful of Dreams,” coming through the speakers now. The three mutts over at refreshments watching him too.

Standing with a hand against the boards, Stella glanced over at Liz still talking to the boys, likely saying something dumb. Pushing off, she windmilled her arms to gain her balance, half the rink between them.

Johnny coming around and past her, calling out, “Hey, slowpoke.”

Picking up speed on the rented skates, she ducked and went under a couple with joined hands, nearly ended on her butt as she bumped them apart. Johnny slowed and let her catch up, holding out his hand, then catching her again from falling, the two of them moving around the rink, holding hands now. Going around two more times, he stopped over by Spencer and introduced her, asking how old Spencer guessed she was, mouthing eighteen behind her back. Also pointed at himself and mouthed to call him Johnny.

Spencer said, “It ain’t right to guess a lady’s age.” Smiling at her, offering his hand.

Stella liking this older brother calling her a lady, told him it was nice to meet him.

Taking her hand again, Bennie did it like it was a natural thing. Stella not pulling away, thinking maybe he did it to keep her from falling, but she liked the way her friend Liz kept looking, the three boys looking too. And she lost track how many times she skated around with him, talking about where they went to school, places around town they both knew. Bennie saying he was serious about his boxing, and driving a cab too. Then asking about her, where she lived, how she liked the school she went to, getting to know her.

Letting him buy her a soda after, the two of them just kept talking, not running out of things. Playing at being eighteen, she pushed away thoughts of her mother worrying about her being out as the afternoon gave way to evening. Then realizing Liz had gone home, Stella told him she’d better get on home too.

Wanting to trust him, but knowing her mother’s rule about getting in cars with boys. Saying, “I’m okay, I can walk.”

They stood talking a few more minutes. Bennie didn’t push it, offering to return her skates to the rental desk, asking, “So, how do I see you again?”

“Well, you come next Saturday and maybe you will.” Smiling, she let him take the skates.

“Guess you’re gonna find out.” Smiling, she started walking, knowing he was watching her, not sure how she’d get another nickel, but she’d get it, and she’d be here next Saturday alright. 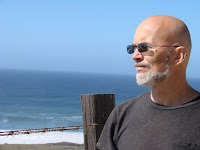 Dietrich Kalteis is the award-winning author of Ride the Lightning (bronze medal winner, 2015 Independent Publisher Book Awards, for best regional fiction), The Deadbeat Club, Triggerfish, House of Blazes (silver medal winner, 2017 Independent Publisher Book Awards, for best historical fiction), Zero Avenue, Poughkeepsie Shuffle, Call Down the Thunder, Cradle of the Deep, and Under an Outlaw Moon. His novel The Deadbeat Club has been translated to German, entitled Shootout, and 50 of his short stories have also been published internationally. He lives with his family on Canada’s West Coast. More info at https://dietrichkalteis.com/

Loved meeting Stella and Johnny. Great opening to the story. Thanks for hosting Dietrich, Kevin.

Great characters. Love the way you introduced them.