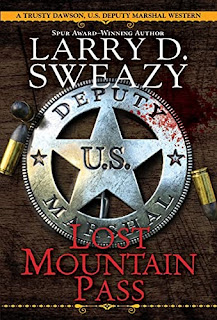 I have seen social media posts from fellow Hoosier Larry D. Sweazy for years and once had the pleasure of sitting next to him at a conference breakfast. He is the author of 18 novels and the winner of multiple literary awards including the Spur Award (twice), the Western Fictioneers Peacemaker Award, the Will Rogers Medallion Award (twice), the Elmer Kelton Book Award, the Best Books of Indiana, and the Willa Award. He still lives in Indiana, about 200 miles from my hometown.

His first book in the Deputy Marshal Trusty Dawson series (Pinnacle, 2021) is undoubtedly a Western. It’s also an excellent look at the police procedures, such as they were, in the 1888 Oklahoma Territory, and an action-laden thriller. It is a finalist for the 2022 Western Writers of America Spur Award, for the 2022 Western Fictioneers Peacemaker award, and for the 2022 Will Rogers Medallion Award for Traditional Western. In short, a lot of people think this is a good read.

The story opens in Kosoma, Oklahoma, in the southeastern corner of Oklahoma in what is now Pushmataha County, where the gunslinging career of the rampaging Darby brothers is brought to an end with their joint execution. Deputy U.S. Marshal Sam Dawson’s next task is to escort Eastern District of Arkansas Judge Gordon Hadesworth back to Muskogee, 130 miles to the north. A quick drive now but a hazardous horseback ride then, especially if any of the Darbys’ sympathizers felt like exacting revenge.

Dawson is approached by Amelia Darby, the sister of the men executed that day, seeking to accompany him and the judge. She has been poorly treated by the town and fears for her safety if she remains there. Dawson is reluctant to agree but the judge overrules him and the three leave town, planning to stop in a sheltered place on Lost Mountain Pass for the night and to finish the journey in the morning. They are ambushed at the pass and Dawson is injured. His search for the remnants of the Darby gang, whom he believes is responsible for the ambush, turn up some interesting revelations about his own past, which is a well-conceived subplot to the law enforcement thread.

An absorbing story with characters straight out of the television Westerns. Recommended especially for fans of Western mysteries, historical thrillers, and police procedurals. The second book in the series was released in June and is available now.