Guest Post: Excerpt: Late for His Own Funeral by Elaine Viets 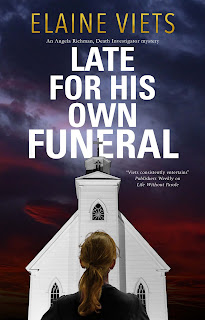 Please welcome legendary award winning author Elaine Viets to the blog. Today she is sharing with us the first chapter of her new book, Late for His Own Funeral. This is the sixth novel in the Angela Richman, Death Investigator Mystery Series that began with Brain Storm. Late for His Own Funeral comes out this Tuesday, July 5th, in print and digital formats.

Late for His Own Funeral by Elaine Viets

I sat six feet away from Sterling Chaney’s closed coffin, wondering how much of the dearly departed was actually in that golden casket. Not enough to fill a briefcase, I thought. Not after Sterling’s Porsche missed the curve and slammed into the rock face at a hundred and ten miles an hour.

I didn’t actually see Sterling’s mangled remains. He wasn’t my case. I’m Angela Richman, a death investigator for Chouteau County, Missouri – home of the one percent. I work for the county medical examiner’s office, and I’m in charge of the body at the scene of murders, suicides, and unexplained deaths.

I’d heard the deceased driver was seriously spiflicated, and hoped he didn’t feel a thing when he met his awful end.

Camilla, his widow, had given her husband what’s called the ‘Golden Send-Off’ – she’d buried him like a rock star in a stunning Promethan casket. Sterling’s remains rested on plush velvet. The casket’s exterior was actually solid bronze, hand-polished to a mirror finish. It shone like gold.

Michael Jackson, James Brown, and Aretha Franklin all went to their reward in a Promethan casket. And now, Sterling Chaney. His casket, covered in roses like a Derby winner, looked incredibly gaudy in the austere Episcopalian church in Chouteau Forest, the largest town in Chouteau County.

I could hear the shocked murmurs and appalled whispers as the funeral home attendants rolled the garish casket up the aisle. The churchgoers would be even more shocked if they knew it cost thirty thousand dollars. In the pew behind us, a sturdy black-clad matron gasped, ‘Good heavens!’

I wondered why Sterling’s socialite widow had chosen such an ostentatious six box. It wasn’t her style. Camilla was tastefully dressed in a black dress and long-sleeved jacket, her blonde hair pulled into a sedate chignon. A small black hat with a discreet veil hid her pale face.

Camilla and Sterling’s closest relatives were long dead, and she’d asked me to ride with her to the funeral in the limo and sit next to her at the church. Sterling must have had plenty of friends – or drinking buddies. Every seat was taken, and the crowd spilled outside.

That was good, I thought. Sterling had been born one drink behind and never caught up.

Silent tears rolled down Camilla’s face, and she blotted them with a black-bordered handkerchief.

Father Win said, ‘The sun will not beat down on them, nor any scorching heat.’

For Sterling’s sake, I hoped that was true. Between the boozing and the womanizing, the general opinion was that Sterling was headed somewhere hot.

‘And God will wipe away every tear from their eyes,’ the priest said.

Camilla burst into noisy sobs and tried to stifle them. Fortunately, the soloist launched into a powerful rendition of ‘Amazing Grace.’ Camilla wept harder, but most people couldn’t hear her.

I knew she was estranged from her husband. Maybe Sterling’s death reminded her of all the reasons why she’d married him – or all that could have been. Sterling had been handsome and charming. Camilla’s tears seemed genuine. I patted her hand, and she gave me a watery smile.

I went to high school with Camilla, which was unusual in Chouteau County. Most upper-crust children went to private schools, but her family was more egalitarian and sent their only daughter to public high school, where she mixed with the likes of me, the daughter of servants.

Camilla and I bonded over our hatred of gym class and became good friends. I was a bridesmaid in her wedding ten years ago, and we marched down the same aisle now blocked by Sterling’s golden casket.

When they first met, Sterling had seemed awed by Camilla’s cool elegance, and she fell in love with his humor and energy. I’d had my doubts about the match, especially after Sterling hit on me during the rehearsal. I often wondered: if I’d said something to Camilla back then, would she have gone through with the wedding? But I’d kept quiet, and she’d married Sterling, for better or worse.

Mostly worse, as it turned out. Much worse.

Sterling started the marriage with a tidy fortune, which he quickly turned into a large one, thanks to the telephone service he started. While Camilla’s family fortune declined, Sterling’s money grew. He poured money into worthy causes and soon had an honorary doctorate from City University and membership in the prestigious Chouteau Founders Club. He was at every charity event, loud and boisterous. The only time he was quiet was when he was seducing some woman.

As the years passed, Camilla seemed to grow thinner and sadder, though she was still a glamorous beauty at forty-one. I wondered if her life would improve now that her philandering spouse was dead. Although I’d never ratted out Sterling, Camilla knew her husband was unfaithful. In the limo on the way to Sterling’s funeral, she’d told me, ‘I’m just relieved there wasn’t a woman in the car with him.’

Across the church aisle, I could see the black-clad dowagers studying the crowd with beady eyes. I’d bet my next paycheck they were trying to figure out which of the younger women had slept with Sterling.

Camilla had opted not to do any of the funeral service readings herself, or to have any of Sterling’s friends deliver a tribute – a wise decision considering the unpredictable boozers he befriended.

Instead, Father Win launched into an earnest eulogy. He was doing a good job of it, too. He’d managed to capture the deceased’s personality.

‘Sterling was a vital man,’ he said. ‘He was larger than life and cast a long shadow. We can feel his presence here today . . .’

‘You betcha, Reverend,’ said a loud voice from the back. Framed in the church doorway was a man who looked a lot like Sterling Chaney.

At first, my brain denied what I was seeing. Yes, the man was six feet tall, and his skin had a drinker’s flush, just like Sterling’s. His hair was blond and slightly too long. He wore a perfectly cut dark-blue Tom Ford suit and he had Sterling’s wicked grin.

In fact, it was Sterling.

The blood had drained from Camilla’s face. ‘No,’ she whispered. ‘You’re dead.’

But he wasn’t. Sterling strode up the aisle and examined the gaudy gold casket.

‘Why, Camilla darling’ – he flashed white teeth at his wife – ‘you did follow my last wishes and got me the swanky coffin I wanted, even though I know you think it’s painfully tacky.’

Camilla whimpered. She was way too white, even for a Forest Episcopalian. I patted her shoulder.

Sterling sized up his stunned wife and said, ‘Black really isn’t your best color, Camilla. It washes you out.’

Sterling was enjoying himself. He turned to address the congregation.

‘I was in the Bahamas for a business trip,’ he said. ‘I left at the last minute and didn’t check in with my lovely wife.’ He didn’t mention that they hadn’t been living together at the time. ‘In fact, I was totally out of touch. No phones, no news media. No nothing.’

Hm. I wondered if he was in the Bahamas chasing women.

‘At the airport, I’d left my Porsche in long-term parking,’ Sterling said, ‘and when I returned from my trip, I couldn’t find it anywhere. Looked high and low. That’s when I called the police. We concluded that my Porsche had been boosted. Then I learned I was supposed to be dead.’ His laugh was a drunken hee-haw. No one laughed with him. They stared at him with frozen faces.

Sterling patted the gold casket. ‘I guess the poor bastard who stole my car is in here.’

He was warming up and putting on quite a show. ‘I had to take a cab to my own funeral. I had the driver stop for some sustenance.’ He held up a bottle of Johnnie Walker Black Label. ‘This was the best we could scare up. Blended scotch.’ He took a long swig.

I could feel Camilla trembling. I thought she might be going into shock.

‘Well, my momma always said I’d be late for my own funeral, and damned if she wasn’t right.’

Sterling turned to his former widow and held out his arms. ‘Camilla, honey, I’m home.’

Camilla screamed and fainted. I managed to catch her before she hit the floor.

Elaine’s Deal with the Devil and 13 Short Stories was published by Crippen & Landru. She's been toastmaster and guest of honor at the Malice Domestic Mystery Conference. Elaine’s won the Agatha, Anthony and Lefty Awards and was shortlisted for the International Thriller Writers Award for best short story. www.elaineviets.com 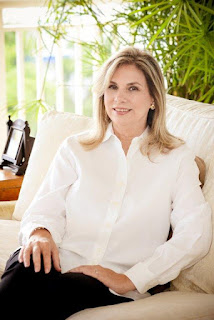