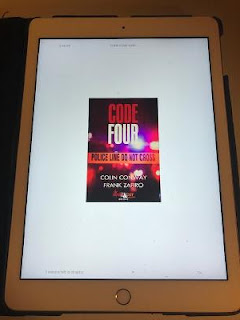 Code Four is the final installment of the series that began in Charlie-316 by Colin Conway and Frank Zafiro. While much is resolved, one can see how this might not be the end of the story for several of these characters. As this is the fourth and final installment of the story arc that has spanned these books and one wants to avoid spoilers, story details will be limited in this review.

This book picks up a few weeks after the end of the last book where the Anti-Crime Team had been dissolved. Yang has quit and left town, Zielinski is on suspension, and Tyler Garett is still active and on duty with the Spokane Police. He works days now which make some of his extracurricular activities a bit riskier. Currently, he is hunting Earl Ellis for reasons that have very little to do with his police work. Ellis is missing and Tyler Garrett has to find him.

At the same time, Chief Robert Baumgartner just got news that will ruin his day as well as many days to come. Representatives from the Department of Justice will be in town within minutes to start an investigation into the department. Everyone knows about recent events that have been publicly reported regarding various officers and the command structure. The deaths of officers, officer involved shootings, and various other situations were bad enough. That media storm had pretty much blown itself out except for a city council person who was taking full advantage to raise her visibility.

Now with the Feds coming, everything will get stirred up again and the blowback for the chief, a bureaucrat fist and a cop a distant second, could be hard to manage. It is not just his future at stake either. Investigators from DOJ bring trouble on many fronts, especially for Captain Tom Farrell who has been conducting an unauthorized and off the book investigation for many months now. He isn’t the only one doing an off the book investigation into one of their own. 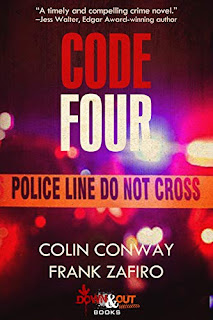 The DOJ team also has their own internal issues as well as personal ones. For their supervisor Ĕdelie Durand, having to leave Washington, D.C., right now is personally brutal. But, she is doing her assignment because the job comes first as it always has. Her assistants, Esteban “Steve” Curado and Danielle Watson, may not be as driven as she is, but they are also very good at their jobs despite the fact they both squabble with each other like teens in the backseat on a family road trip.

What follows is a politics heavy read that involves the DOJ investigators and the major characters of this four-book story arc as things come to a resolution in many different ways. The dynamics between various characters both personally and professionally are a hallmark of this police procedural series and remain present here. Politics has always been a theme in the series and it is heavier here as many folks try to cover up what they are doing or have done. While some folks were corrupt and did things for money, others took actions with the best of intentions. The arrival of the DOJ makes it impossible to hide what has been going on and brings many matters to a long-anticipated conclusion.

What began with Charlie-316 ends here, apparently, in Code Four. A great series by Colin Conway and Frank Zafiro that absolutely should be read in order as each book builds on its complicated predecessor. This book, and the series, are highly recommended.

I received a digital ARC of this read from author Frank Zafiro weeks ago with no expectation of a review.