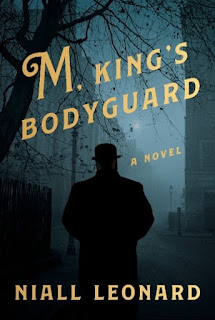 M, King's Bodyguard by Niall Leonard (Pantheon, 2021) is based on the biography of William Melville by Andrew Cook (M: MI5's First Spymaster [Tempus, 2004]) and the autobiography of Gustav Steinhauer (Steinhauer The Kaiser's Master Spy [John Lane, 1930]). Melville was the founder of England’s MI5 and the model for Ian Fleming’s character called M. Steinhauer became the head of the British section of Germany’s Intelligence Service. At the time of this fictionalized account, Melville was head of Scotland Yard’s Special Branch and Steinhauer was the Kaiser's bodyguard.

It is January 1901 and the United Kingdom is undergoing cataclysmic change: Queen Victoria is dying. Ascending to the throne at the age of 18 in 1837, most people could not remember a time when she was not their queen. Prince Albert, the Prince of Wales, calls Melville to Osbourne House, where the family is gathered, to enlist his assistance for the arrival of Kaiser Wilhelm of Germany, Victoria’s grandson and Albert’s nephew. There Melville meets Steinhauer.

Plans for the funeral have been in place for years. Melville’s job is to ensure the anarchists running rampant in Europe do not converge on London and assassinate any of the crowned heads paying their final respects. That many coveted targets in one highly visible location would be irresistible to any dissident worthy of the name, and Melville knows it. When he receives word of a credible plot to kill the Kaiser, his clueless supervisor declines to provide back-up staff so Melville enlists Steinhauer’s support instead. Locating and neutralizing a nameless radical revolutionary proved more challenging than Melville expected. The would-be killer leads Melville and Steinhauer on a chase across London from safe house to safe house, into a high-class bordello, through a muddy river, around the public gasworks, and down subway tunnels.

This fast-moving and action-filled narrative describes the people and the city of 1901 in exquisite detail, conveying authentic sights, sounds, and smells of a place from more than 100 years ago. Leonard certainly did his research; the book has a sense of immediacy I would not have expected in an historical account. I especially liked the description of Melville sailing through the air during an explosion. The writing is wonderful.

Hints of the war to come are evident even in 1901. While Melville is forced to rely on Steinhauer, he never really trusts him, aware of the underlying discord between the new King Edward and the Kaiser. Later on in their lives they become adversaries. The final pages of the book lay the groundwork for Melville’s career in what would become MI5 as well as for a sequel to this very fine historical thriller. I am looking forward to it.