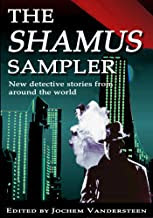 From the massively magnificent archive…

As author Reed Farrel Coleman writes in the introduction, crime fiction these days has grown far beyond the private investigator. Not that PI novels no longer exist, far from it. But, these days the PI novel does not hold the preeminent position in the world of crime fiction as it used to back decades ago. The classic PI of yesteryear may be gone to a certain extent as no one walks around in trench coats while wearing a fedora these days. But the classic PI is still present in manner and action, though he or she appears in a far different form these days. That idea is very clearly illustrated in the excellent read The Shamus Sampler that features “new detective stories from around the world.”

This highly entertaining anthology begins with one of the hardest stories to explain while not giving away too much. “Mysterious Private Investigations” by Peter DiChellis is one very complicated tale. It involves a jewelry heist, a private investigator, a man in jail for a crime he did not commit, and a search for justice, among other elements.

Jake Diamond is up next in “One Hit Wonder: A Jake Diamond Short Story” by J. L. Abramo. If Darlene Roman had answered the phone like she should have instead of ducking across the street for a drink at the health food bar across the street, Jake would not have answered the phone. He did answer and the caller, who didn't give him time to speak, gave the instructions on how he wanted somebody killed. With little to go on, Jake has six hours to find the intended victim somewhere in the city of San Francisco.

“The Case of the Derby Diamond” by Jeffery Marks comes next with a classic style PI tale set just after World War II. Mrs. Van Hoskins is a very wealthy woman and exceedingly unhappy as her ring, a seven carat diamond surrounded by a jewel encrusted horseshoe, is missing. She wants it back. PI Donnelly has the chance to find the ring and make some money as The Van Hoskins want things keep very quiet.

Gypsy is a call girl and is about to get out of the life. She plans on making Nick Kepler her final client in “Gypsy's Kiss” by Jim Winter. Somebody is not happy with her, or her decision, and is making the point loud and clear. The Cleveland PI will have his hands full trying to keep Gypsy alive and well.

Sergeant Thomas Hamilton kept Harry Charters alive during the war and Harry knows he owes him a huge debt. It has been ten years since they saw each other and the passing years have not been kind to either man. Hamilton’s son is missing in “The Smell Of Perfume” by Graham Smith. Hamilton wants Chet found and wants Harry’s help.

Jim Wolf, private investigator, lives on a boat in a harbor in Oakland. When he isn't actively working he hangs out at a bar known as “Big Emma’s.” He almost never works for lawyers, but makes an exception for defense lawyer Sandra Jacobs. She needs his help on behalf of a client in “Rage: A Jim Wolf Mystery” by Tim Wohlforth. Wealthy psychotherapist Henry Platt was brutally killed at his outdoor pool. Sandra’s client, his wife Carol, has admitted to killing him, but none of it makes sense.

Set in Morris, Oklahoma in 1965 “The Patriot” by Sean Benjamin Dexter is right out of the Cold War with a tale of Russian spies, espionage, and life in small town, Oklahoma. One of the residents thinks he heard somebody who sounded like a “Ruskie” on his amateur radio talking about the local Dow Chemical plant. Local police can’t be trusted so the resident has come to local private investigator, Alex Taylor, for help.

He may not be a private investigator as such, but reporter Liam Michael Murphy who goes by the nickname of “Mad Mick Murphy” acts like one in “Drumstick Murder” by Michael Haskins. He is at the annual Key West Songwriters Festival and is supposed to interview the legendary Dallas Lucas. His interview subject is dead and it is very clear it was not a suicide. With Lucas murdered the planned interview feature will now be a piece on his murder--unless the local cops decide the reporter did it.

It is always a treat to come across a story from Texas author Bill Crider. Far from the East Texas stomping grounds of his Sheriff Dan Rhodes series, “A Matter Of Heart” is set on Galveston Island. The highly entertaining tale features a private investigator working the murder case of one Sue Traylor. It is a complicated case that has links to the past and the colorful history of Galveston when literally anything was possible on the island.

“Christmas Morning” by Stephen D. Rogers comes next where a man is sure his wife is cheating on him. He bases that on how she behaved at the recent holiday party they attended. He wants proof and will use that to convince her to stop. First up, the private investigator has to find proof that his client is right.

Keith Dixon takes readers over to the United Kingdom in “The Same Old Story.” Richie Downes is insisting that he be the latest client of a private investigator by the name of Sam Dyke. He is a big physically imposing man who insists that he is not looking for a divorce; he just wants to know who his wife is seeing. All he wants is the name of the person and does not want proof. He is willing to promise not to hurt anyone. Dykes needs the money and reluctantly agrees.

“Q” didn't want to have to give up a knife she liked, but considering she just used it to gut a man in the frozen alley, it seemed like wiping and dropping it was a good idea. That dead guy is just one of the many issues going on in the complicated “The Dutch Connection” by Kit Rohrbach.

Fred Zackel is next with his tale set in San Francisco titled “Mario and Cheryse.” A streetwalker named Cheryse should lead to Mario Rosales. His grandmother wants him found and convinced to turn himself in before the cops find him. She would much rather have Mario alive and in jail as opposed to being killed in the streets by the cops.

Editor Jochem Vandersteen brings the book to a close his own tale titled “Hired From The Grave: A Noah Milano Short Story.” Noah Milano is a security specialist/ investigator who got a phone call from a man named Mark Beck who wanted to hire him. He would explain why when Milano cane to his Burbank area apartment. When Milano arrived, he found Beck dead in what could be construed as an accidental auto-erotic asphyxiation. Milano doesn't buy it and soon is working the case as a murder.

Each of the fourteen stories in “The Shamus Sampler” features a small introduction to the piece that provides context to the story as well as an author bio at the end. Each of the author bios makes a point of mentioning titles of other works by the author as well as the name of the publisher. The tales in this anthology are not only very good ones, but are often very complicated and provide plenty of twists right up to the end.

Material supplied by a good friend for my use in an objective review.

The stories in this anthology all seem good, and as usual your descriptions of each are well done.

I enjoyed it, Patti. There is a second book, so maybe I will blow the dust off that review and run it again next week.