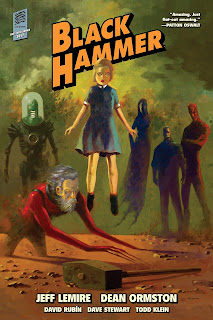 Black Hammer Vol 1: Secret Origins by Jeff Lemire is strange. A group of superheroes are stranded on a farm in a small town somewhere. They have been stranded for the last ten years and are unable to escape despite several attempts to do so. They work to keep their secrets from others while also trying to uncover why they are trapped here. This is a big getting to know the characters volume since they are all original characters inspired by various genres and characters elsewhere.

For example, there is a Martian warlord, there is a Shazam rip off, there is a robot, there is a science fiction 80s style hero called Colonel Weird, and others. This is a series that is fairly unique and kind of hard to explain.

There is some flashback origins style action while most of it the pages are character drama contrasting who they were with who they are now. Most of the characters are not doing well, except for one. I have in my TBR pile the second volume called The Event.

My reading copy came via the Hoopla app and the Dallas Public Library System.