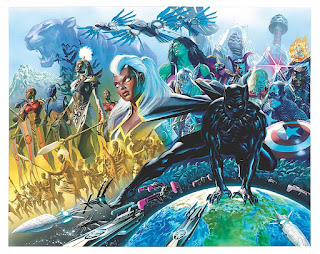 Black Panther Vol 1: The Long Shadow by John Ridley is the first volume in the newest Black Panther series. In this series, Wakanda and T’challa are not doing well under their transition to democracy and the change has been very hard. Forcing T’challa into a ceremonial role as leader has forced him having to sit back and watch as his fellow Wakandans seem to spend more time bickering in committees then actually acting in the people’s interest.

Soon T’challa is back in action as one of his secrets as Kings has started to come out. During the early days of opening Wakanda to the outside world, T’challa secretly placed several agents in various countries to act as guerilla warfare agents if those countries attempted to attack Wakanda. He had them cut off all contact, faked their deaths, and made them deep undercover sleeper agents elsewhere. One of those folks was his best friend.

Now his best friend is truly dead and his other agents are being hunted. T’challa needs to get his agents out while trying to keep the plan and their actions secret from the world. Other nations could potentially see the planting of sleeper agents in their countries as an act of war or potential terrorism.

This is a more cynical take on T’challa than a lot of the most recent runs by most writers. Current Marvel writers have tended to just highlight his preparedness and not the fact that he prepared so much because he does not trust anyone else. He knows the truth that friends can become enemies at any time. His desires to protect Wakanda at all costs can lead him to ends justify the means behavior.

His usual supporting cast outside of the Dora Milage are included in the read. The Dora Milage was disbanded in the last comic run along as well as the idea that Wakanda has a secret space empire. The last run was widely considered pretty but confusing. Something that I found to be true, so I read only part of it.

This is a more straight forward run so far. I look forward to reading the second volume when they do get around to releasing it in November. I do recommend Black Panther Vol 1: The Long Shadow by John Ridley.

My reading copy came by way of the Hoopla app through the Dallas Public Library.