Jeanne Reviews: Midnight Riot aka The Rivers of London by Ben Aaronovitch 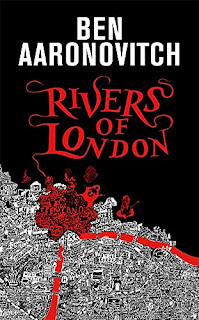 Peter Grant is a young mixed race probationary constable in London.  He and his friend Lesley are hoping for better assignments but at the moment they’re on call as extra warm bodies when needed—as they are one blustery evening when a body turns up in Covent Gardens. The somewhat inebriated discoverer of said body believed at first it was just a passed out drunk until he noticed it was missing a notable feature—namely, its head.

While trying to not freeze to death waiting on the Murder Investigation Team to do its work, Peter catches sight of a potential witness to the crime, one Nicholas Wallpenny.  He begins with his best interview techniques and the gentleman turns out to be a veritable fount of information:  he saw the whole thing and can describe exactly how the crime took place and even offer a description of the murderer.

There’s just one problem:  Nicholas is a ghost. Which he proves by vanishing.

The next thing Peter know is that he’s been assigned to Inspector Nightingale as… well, an apprentice.  Because apparently ghosts are real, magic is real, and the Things That Go Bump in the Night are also real—and dangerous. Nightingale is a one man department, so it’s not exactly a plum assignment but since the alternative was the Case Progression Unit (in which one sits and types in reports for other officers all day), Peter is willing to give it a shot.

He’s going to be for a heck of a ride.

By the way, Nightingale is a wizard—not like Harry Potter.

One of the first things I noticed was how funny this book is.  It’s not slapstick, but wry observations on London, the police, and life in general.  I also got caught up in the storylines, even if sometimes I didn’t quite understand what was going on. (The titular Rivers of London have personas and complicated relationships.)  I really wanted to know how it all was going to turn out.  Aaronovitch has a strong grasp of folklore and the history of London which he uses to full advantage.  I was also enchanted by the mini-tours of various sections of London as commented on by Peter.  It reminds me a bit of the wonderful Christopher Fowler series The Peculiar Crimes Unit aka Bryant and May.

Fun and addictive, I think I’ll be reading the whole series.

Rivers of London aka Midnight Riot