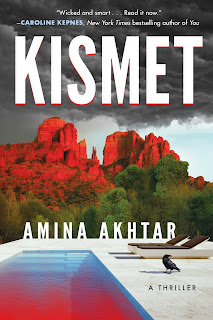 Kismet had me at Sedona, Arizona. This breathtaking city is a tourist trap, but it’s easy to understand why. The stunning landscapes attract visitors from all over the world, and I’d never read a thriller set there before, so I was eager to check out Kismet.

Once I started the book, it quickly turned into a fast-paced read that I couldn’t put down. Ronnie might not appeal to some readers because she is very passive, but that’s part of her journey, and I found it completely credible. I related to her and her attempts to fly under the radar to avoid conflict and her inability to really understand, love, and assert herself.

This isn’t your typical thriller with an active investigation into the murders. The story focuses on the way that crime impacts local residents, and how people with varying agendas try to capitalize on the crimes for their own gains.

I was a teenager living in Ontario at the height of the manhunt for a suspected serial killer you may have heard of—Paul Bernardo. And I grew up in Cottage Country, so I spent every summer of my life (until adulthood) dealing with tourist infestations and the ways people capitalized on tourists. From that perspective, I found the events in Kismet quite credible. As someone who’d spent their childhood exploring woods and lakes and disappearing for hours without consequence (because that’s what we kids did in the 70s), the search for Bernardo prompted additional parental supervision and more public scrutiny. My parents even gave a report to the police about someone they knew who had a similar car to one seen near an abduction. Everyone was on edge, and when everyone’s on edge, things can escalate quickly. Fear drives wedges in communities and relationships.

There’s some masterful sleight of hand at play here in the storytelling, because while you’re legitimately so focused on some events unfolding, there are other developments that come together to surprise and fill in the missing pieces in this story. There is some woo woo, you could say, because there are chapters told from the perspective of ravens. I liked this added touch to the story, because it definitely tells you there’s more at work here than what meets the eye. However, if you don’t like woo woo, you could probably skim or skip those sections without it significantly impairing your ability to enjoy the core story.

There are some political threads in Kismet related to racism. In my opinion, you can’t tell this kind of story without delving into the current political climate. To try to do so would be disingenuous, and the politics of racism is very much a factor for Ronnie. We see that throughout the story, from the people who were so casually racist they never listened to her and tried to label her as something she wasn’t to the people who profiled her because of her skin color.

Now, getting back to the woo woo portion … one of the things I really liked was the reference to people’s auras. I don’t know much about this at all, but I really liked the idea of seeing beyond the surface to understand what a person’s really about.

Kismet provides resolution for the core threads, but it isn’t exactly what I’d call a neat and tidy ending. There are a few details that aren’t followed up on. While some thriller readers may find that annoying, it’s easy enough to guess at the details and feels more credible because, in a way, it left this question mark out there surrounding one character and their future. Kismet is a thriller that left me grappling with questions about morality, and why sometimes I’m more than happy to look the other way, no matter what I believe is right or wrong. More than that, it’s one that’s lingered on my brain long after reading the last page, which is evidence of how much I enjoyed it. 5 stars.

Sandra Ruttan is the founder and EIC of Dark Dispatch. In March 2022, Dark Dispatch released The Dead Inside, an identity horror anthology co-edited by Laurel Hightower and Sandra Ruttan. Ruttan's novels are available online, and if you're looking for a place to start she suggests Harvest of Ruins.