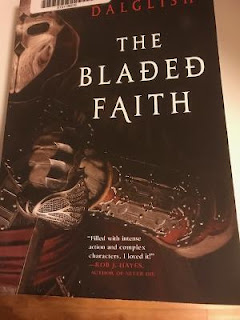 The Bladed Faith by David Dalglish is the first book in a new fantasy revenge series. Cyrus was 14 when his country was invaded, one of the gods was killed, and his parents, the royal family, were killed by the invaders. After a few years being held captive as a royal hostage, he escapes through sheer luck, and manages to find a group of rebels who have been fighting the invaders. The rebels have a plan to train him in secret and give him the identity known as “Vagrant.” Their idea is to make it appear that Vagrant is a supernatural masked assassin who is invincible. They believe his actions, his very presence, will inspire the people to rise and revolt.

This book has multiple trigger warnings including suicide, homophobia, anti-transgender points of view as expressed by characters, etc. Since the bad guys are a group of religious worshipping invaders who have very strict views on how people should live their lives and be married to, among other things, there are multiple times where they commit heinous acts while trying to force their world view on others. This is an action-packed violent revenge novel with some dark moments.

The Lion god of a rebel country was one of my favorite characters because of his complex qualities and his duality. It is not often in a book that the same character can be extremely kind, but also incredibly ruthless. A lot of the characters have a duality to them.

There are multiple character POVs at work in The Bladed Faith by David Dalglish including several of which are people of non-straight view. All the characters are very different and have unique personalities. I highly enjoyed this book.

I am looking forward to the sequel which comes out next year titled Vagrant Gods. The first chapter of that book was included in my library print copy and has one heck of a twist opening I did not see coming at all.

My reading copy from the branch we use, Lochwood, of the Dallas Public Library System.