Karla Ercums claimed the pink amethyst ring on her finger was handed down to her by her grandmother. Drug Cop Ray Tabor is sure the ring is stolen though he can’t prove it. Law 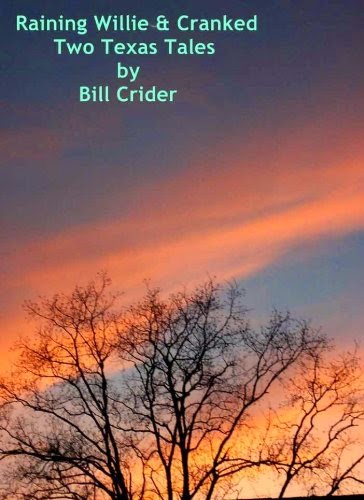 enforcement can easily prove she stole other pieces of jewelry while working for Kleen Maid Service. Her actions as a thief as well as her desire for a shorter prison sentence means Tabor can use her as a snitch. In an area where everybody knows everybody else and most folks are related by blood, marriage, or both, Tabor is a definite outsider. He can’t make a drug deal on his own and needs the help of locals who are not interested. Karla has no choice, as both she and tabor know, and he will use her as he sees fit.


So the plan is for Karla to get into a meth house down in the Angelina River Bottoms. She is to wear a wire and make a buy. It should not be that hard or complicated, but things go sidewise. Good thing Karla can improvise and think on her feet.

The repercussions of the above and their aftermath is the subject of the following tale titled “Cranked.” One can’t say more without telling too much and ruining the good read.

Raining Willie & Cranked: Two Texas Tales features gritty characters deep into the drug trade and living on the edge where violence is common place. The short tales in this quick read are good ones where folks die, things get blown up, and things are more than a little twisted. Don't let the tranquil cover fool you.

According to Amazon I picked this up on February 24, 2012. I will have to take their word on this. Beyond the fact that everything does get read and reviewed here—eventually—I have no idea now if I got this during a free read promotion by the author or by way of gift card purchase using funds from my Amazon Associate account. Since Amazon counts free reads as sales they don’t designate anything beyond the date acquired so I have no idea. Regardless, the information above is designed to comply with the nonsensical mandatory FTC reporting requirement aimed at us dangerous book reviewers as well as to appease meth heads, soccer Moms, and our coming simian overlords.

I first read "Cranked" when it was a Derringer nominee (it later deservedly won the award), and then again a few years later. It's easily one of the best short stories I've read in the past seven years.