Please welcome back Mark Troy with his perspective on the female private detective. Two Wednesdays ago he detailed Carrie Cashin. This week his focus is on Sarah Watson.

Among the sisterhood of female crime-fighters are many attractive, hardboiled Janes who have every man they encounter eating out of their hands. Sarah Watson is not one of them. She is middle-aged, frumpy, heavy and charmless. ". . . a large woman,  solid with the solidity of rock." Her clothes are "rusty black," her hair is gray and her bosom is "rigidly corseted." She wears old-fashioned headgear and square-toed shoes. With her craggy chin and incipient moustache, she is not a doll to make the cover of a magazine. 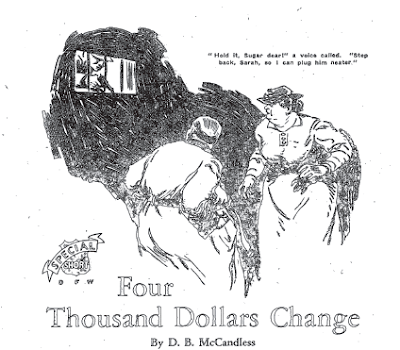 The creation of D. B. McCandless, Sarah Watson appeared in eleven stories in Detective Fiction Weekly from 1935 to 1938. She ran the Watson Detective Agency, ably assisted by a tall, thin red-head named Ben Todd, whom she calls "whipper snapper." The stories are more medium than hard boiled, but the narrative is fast-paced and highly readable.

Sarah carries a gat, as does just about everybody in these stories, and she's not afraid to pull it out of the pocket of her skirt. Neither is she intimidated by gorillas who wield them. When a man sticks a gun into her stomach, she says, "If you shoot there, feller, the bullet will flatten on solid whalebone." More than one gorilla bears the marks of her pistol whipping. Sarah admits that she would like to ". . . beat up a man proper, for once! I'd begin on the nose...The nose is a nice tender place to begin. Maybe I'd break it -- after a while."

Sarah is all determination. She won’t back down from anybody, whether it be the law, a banker, bureaucrats or gangsters, who stand in the way of her solving the case and getting the geetus, and, usually, someone’s goat. Those who do come up against her grudgingly admire her intelligence.

Sarah is amazingly agile for her size and age, able to climb over gates and leap off of trains easily. The stories strain credibility. Sarah is a lone vigilante in a world of bumbling police and incompetent district attorneys. When a known crime figure kidnaps and kills a young girl, only Sarah can bring him to justice by planting the ransom money on him--money which she herself obtained by breaking into the district attorney’s home and taking from his desk where it was conveniently left outside of a locked safe. In another story, she constructs a dummy out of Ben Todd’s clothes, along with a parachute, and tosses the bundle out the window of an airliner in a ruse to convince a crook that someone else has made off with his stolen loot.

In spite of the credibility gap, the stories are fun reads, chiefly due to the interplay between Sarah and the long-suffering Ben. Ben is brash and impetuous and needs to be restrained for his own and Sarah’s good. She locks him in closets or the back of her car, and even singes his hair with a warning shot. He calls her a she-devil and harridan when he’s angry with her, and “old girl” when he’s not. At the end of a case full of bickering, however, she is willing to share her lunch with him, which, of course, she brought from home.

Some of the Sarah Watson stories can be found through an internet search. Two of the best—“The Corpse in the Crystal” (1937) and “He Got What He Asked For” (1937)—are reprinted in Otto Penzler’s The Black Lizard Big Book of Pulps (2007). Little is known about D. B. McCandless. It’s not even known if McCandless is a man or a woman. He or she is the author of over fifty stories appearing in such magazines as Detective Fiction Weekly, Gangster Stories, Speakeasy Stories, and others. He or she does not appear to have written any novel-length stories.

Mark Troy is the author of The Splintered Paddle, The Rules, Pilikia Is My Business, and Game Face. His website is http://marktroymysterywriter.com
Posted by Kevin R. Tipple at 12:30 AM

Sarah sounds like a fun heroine. They should have made a movie. Cathy Bates would have been great as Sarah.

I love the idea of a heroine who is not gorgeous, sexy, etc. The modern version gets to be tiresome. Sarah Watson and her creator deserve to be better known. Yes, Cathy Bates would be great.