Troy Adam most recently left the Tampa PD in less than ideal circumstances. This June morning he is in the small town of Mangrove Bayou located somewhere south of Naples on the Gulf coast. Summer has come to Florida and Troy Adam has come to interview for the job of police chief. Of course, they don’t call it that. They call it the “Director of Public Safety” even though that is not quite what the sign on his door reads after it was vandalized a little bit. 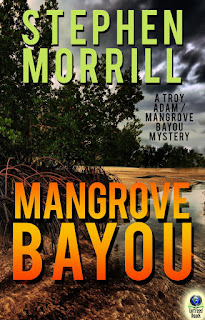 The mayor and two council members had asked him in to interview as he was one of two candidates. The other one had bigger issues  and Troy has a good resume. Upon meeting him they aren’t sure what to make of Troy Adams beyond the fact he is biracial and has a bit of an attitude. Considering what happened with the last police chief--- allegedly--- and the applicant pool it isn’t like they have much of a choice.

Hired with the understanding he is on a probationary period of six months Troy Adam begins to change the culture of the police department. That is when he isn’t working a murder case, dealing with a hurricane, developing a romantic connection, and a few other things. The man is busy and motivated for a variety of reasons in this very good book.

Very reminiscent of the Jesse Stone series by Robert B. Parker, the tale is complicated with a considerable amount of character backstory present in the book. While Troy Adam is dealing with trauma and that storyline is a major presence, he copes in other ways that has nothing to do with alcohol. A refreshing change from what is usually portrayed with these characters and an angle that makes him all the more real.

Mangrove Bayou: A Troy Adam Mangrove Bayou Mystery by Stephen Morrill is an excellent start to what could be a very entertaining series. Published by Untreed Reads this is an excellent fast paced mystery that has frequent funny moments. Along with a richness of detail that really brings the work alive in the mind of the reader. It also proves that the old adage about how one should not open with the weather wrong as the weather is a major character force through the book.

E-book review copy supplied by the publisher for my use in an objective review.

Seems an interesting book. Onto the list it goes!

Stephen Morrill here. When Kevin writes, in his review of Mangrove Bayou, "Very reminiscent of the Jesse Stone series by Robert B. Parker," he must be a mind reader. I was a huge fan of Parker, have all his Spenser books and his Jesse Stone/Paradise, MA books.

When Parker died I was bereft. I moped around a few months and then said to myself, "You're a writer. You've done some other genre writing. You could do a Jesse Stone book." So I created the fictional town of Mangrove Bayou, Florida and a police chief who was northern born, mixed-race and recently-fired from his last job. It clicked with me and I hope it clicks with readers. Fun to write, fun to read, and more to come (I've actually written five; they're in the pipeline, and I see no reason to stop there).

Mangrove Bayou, by the way, is sort of a mix of Everglades City and Cedar Key, for those of you who may have visited those small and remote places.

You can read the first few chapters of the other four books at: http://www.mangrovebayou.com