Having delivered prisoner Luther Hyatt back to Cheyenne, U. S. Deputy Marshal Cash Laramie is looking forward to some time off. After putting up with the foul piece of human garbage known as Luther Hyatt for three very long days on the trail, Cash has plans for a bath, food and booze, and quite possibly some time with Lenora Wilkes. Unfortunately, Chief Marshal Devon Penn has other plans for Cash. 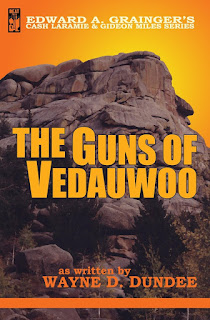 Chief Penn is very concerned about a possible Indian uprising based on a movement, some would call it a religion, in the area. While that idea is a bit vague, it is clear there was a recent prison break down at Castle Rock Prison located south of Denver. One of the escapees is a guy named Vilo Creed known as “Creed the Breed.” He might be headed towards “Vedauwoo Rocks” also known as “Skull Rocks” to some. He also might have gotten ahold of 100 Springfield Model 1873 carbines that were stolen several years ago.

Creed is half Indian as he is Lakota Sioux and has familial connection to Kicking Bear who is trying to spark the uprising. If Creed has the guns and gets them to Kicking Bear the chances of an uprising of some sort rise dramatically. Chief Penn knows Cash knows the Vedauwoo better than most since he spent some of his time as a child moving around the Vedauwoo. He wants Cash to get there and stop Creed by any means. Recovering the guns would be a nice bonus, but the main mission is to get Creed before he can get anything going in the area. Once again Cash is being sent to deal with a major problem without any backup. It is not the first time and won’t be the last.

Like many of the books in this western series, there is a mystery at the heart of the tale. Such is the case here in a tale that works on multiple levels. Richness of detail, characters with multiple motivations and agendas, and plenty of action make this another very good read in a compelling series. Billed as the sixth book of the Cash Laramie and Gideon Miles Series this could easily be read first if you are not familiar with this series.

I picked this up quite some time using funds in my Amazon Associate account in order to read and review it.

This sounds like it could be fun. I'll have to look for it.