Hopefully, you are not like me and read the title of this review by Kaye George and instantly started hearing the song “Tainted Love” …

I immensely enjoy learning things when I read mysteries. I know that beautiful mountain places, which are attracting more and more building, are having water troubles, but this novel did much to inform me further. 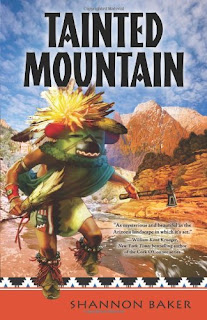 The mystery isn’t a vehicle for the water question, though. It’s a bona fide mystery with a compelling sleuth, Nora Abbot, who didn’t want to end up running an Arizona ski resort, on fictional Kachina Peak, near real Flagstaff. She inherited it from her uncle and, at first, feels duty bound to carry on with his vision. She is encouraged by her husband, the charming Scott Abbot, until lately. He has cooled on the whole project and perhaps on her as well. Maybe because it’s gotten to be too much work. In fact, they’ve had to go to court to win the right to pump water for snow making during the present drought.

As the story opens, Nora has just won her court case, with the blessing of the local Native tribe. However, as she exits the courthouse, she must face an angry crowd of hell-bent “enviros,” led by Big Elk. Nora is convinced that his followers, Guilty White People, don’t thoroughly understand her operation or they wouldn’t object so strenuously. But worse than facing Big Elk on the courthouse steps is facing him without her husband. Where is he? She soon finds out why he isn’t there. He’s been murdered, but no one knows who did it. The local Hopi tribe turns against her, her irritating mother shows up, the wealthy Barrett McCreary is suspiciously currying her favor, and she doesn’t know what to make of the handsome Cole Huntsman. Whose side is he on anyway?

What I appreciate most about this page turner is that both sides of the environmental questions are presented. They’re gone into rationally by the people who believe they’re right. The reader doesn’t get any diatribes or bias from the author at all. Just a ripping good read.

Reviewed by Kaye George, author of Death in the Time of Ice for Suspense Magazine