Living on a farm in Stark County, North Dakota in July of 1964 is hard, but it isn’t winter and that helps a little bit. Things are harder for Marjorie Trumaine than most because she is trying to manage it all pretty much by herself. It has been that way since her husband, Hank, had his hunting accident that left him blind and paralyzed. He spends his days, except for a rare trip away from home, lying in their bed unable to care for himself or the farm they both love. 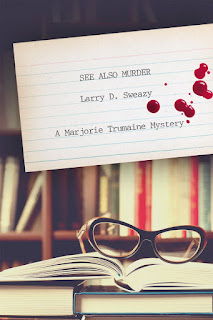 The Knudsens on the next farm over were there for Hank and Marjorie long after everyone else in the small community got on with their lives and forgot about them. Erik, the father, supervised his sons, Peter and Jaeger, while they did chores on the place after they had finished work on their own farm. Lida, their mom and Erik’s wife, brought food for months while Marjorie and Hank slowly adjusted to the catastrophic change in their lives. Over time that help as well as Marjorie’s ongoing job as a freelance indexer has allowed them to survive in their new normal post-accident reality.

The news that Sheriff Hilo Jenkins brings Marjorie this July morning is hard to deal with on any level, but especially now after everything that has happened in recent months. Erik and Lida have been brutally murdered while they slept in their bed. Their sons, Erik and Jaeger, are physically fine as they slept through the murders in their home. Sheriff Jenkins does not believe the boys had anything to do with it though he does intend to question them about the murders. He does believe an amulet found in Erik’s dead hand plays some role in the case.

Marjorie has a reputation, one that she has tried hard to control and stifle, as being the smartest person around. She can’t help using words that many in the area don’t know or understand. Her love of books and knowledge has only increased the last several years as she has built a career of freelance work of writing indexes and meeting deadlines. What began as a source of extra income is now her sole escape from reality as well as the primary source of income  for the family. Sheriff Jenkins wants Marjorie to figure out what the amulet means so that he might figure out who killed Erik and Lida. It is his only real clue and he wants her role in the case kept secret. She reluctantly agrees to help it is the least she can do for the Knudsens – the living and the dead.

What follows is a very complex and highly atmospheric mystery by award winning author Larry D. Sweazy. The North Dakota landscape is a constant character presence in this novel that blends history and lore, a mystery full of twists and turns, and the role of family (by birth and other means) into a read that quickly pulls the reader into a different time and place far from home. Recently published by Seventh Street Books, See Also Murder: A Marjorie Trumaine Mystery is a highly addictive read that will keep you reading far past your bedtime. It is very much well worth your time.

Material supplied for my use by the good people of the Plano Public Library System.

Excellent review, as always, Kevin. I'm always interested to see what you write, and see what I didn't cover in my review. Your closing paragraph is terrific. Thanks!

Thank you for the compliments, Lesa. Much appreciated.

This book is one of the very few in recent weeks that I could get totally lost in and forget reality for awhile. When an author can do that for me under the circumstances going on here--public and private-- the author has given me an incredible gift.