Friday means a lot of things including Friday’s Forgotten Books. I believe Patti will be doing the FFB links today at her blog. If not, I will fix this sometime later today when I am home as Sandi has an appointment down at Texas Oncology at Medical City Dallas Hospital. I have no idea when I will be home as Sandi was supposed to start chemo today and most likely will not as she remains very ill.

I first told you about BURN by Jonathan Lyons back in 2001. I told you again in a FFB post back in March of 2011. I am telling you again to read this book. Below is the original review written the first time around. Despite my hope for a sequel first expressed in this review in 2001 there has not been one near as I can tell.


Jonathan Lyons has crafted an intriguing mystery set on our world in a not too distant future. He has taken current events and extrapolated a logical futuristic setting from them while adding multi-dimensional characters. At the same time, he asks fundamental technology driven questions such as when does something totally technology based, achieve human status with feelings, emotions, and the like? 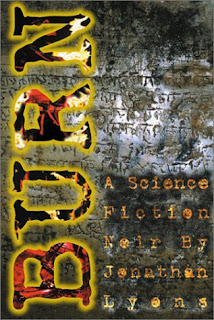 In this future world, giant corporations run the country. The effects of global warming have come to pass, raising the world's sea levels and destroying major cities. Permanent fogs of smog have rolled in causing a perpetual acidic rain. The well to do have managed to flee to where the sun still shines, artificial islands created in places like the South Pacific and Indian Oceans. Corporations caused it all to happen as they bought off the politicians and set themselves up to run everything. The biggest corporation around is Expedite, which among other things, is the corporate sponsor of Old New York's police force. The suits make the decisions about what gets investigated not the cops.

Cage used to be a cop and was a pretty good one. He annoyed the powers that be, by investigating the death of Joseph Fuhlber, an Expedite computer scientist. The doctor's partner was also killed and both were classified as suicide. Both deaths were clearly murder and when Cage wouldn't leave it alone, he was booted from the force, nearly destroying his life. Cage is surviving, financially and emotionally, but just barely.

Janice Gild, who wants her brother's death investigated, contacts him. The cops aren't doing anything to speak of and the dead brother has links back to Expedite. The man was incinerated in his own condo while in bed and amazingly, the rest of the condo did not burn. While vaguely interested and in need of money, Cage does not want to run afoul of Expedite again. He grudgingly agrees while at the same time warning her, that he won't fight Expedite if they don't want it investigated.

Soon, he discovers that the crime scene has been tampered with and Janice Gild's brother was only one of several to strangely die by incineration. If it wasn't spontaneous human combustion, a rare event, then what is happening? Bodies begin to pile up and Cage slowly figures out that the only help may come from the missing android domestic Jennifer Four. But, Jennifer Four is not what she once was and has developed her own agenda and Cage may be interference to be removed.

This debut novel (available in a variety of formats) is very good with plenty of action and multi-dimensional characters. Jonathan Lyons deftly mixes in back ground information and social commentary without sliding into preaching. He adds some downright funny parts, which I won't spoil by revealing. This is a very good book and I eagerly await Mr. Lyon's next project which this reviewer hopes just might be a sequel to this effort. Enjoy!


Material provided by the author in exchange for my objective review.