Monday With Kaye: "The Life I Left Behind” by Colette McBeth (Reviewed by Kaye George)

Okay, so you have decided you don’t want to read a series for awhile. Kaye George has you covered this week with her review of The Life I Left Behind by Colette McBeth. Published last February by Minotaur Books it is currently available in hardback, audio, and e-book formats with a paperback version hitting the shelves in January.

“The Life I Left Behind” by Colette McBeth

Very chilling stand-alone thriller! There are two main characters who very nearly meet the same fate. One was left for dead after being strangled, the second was successfully killed by the same hand. 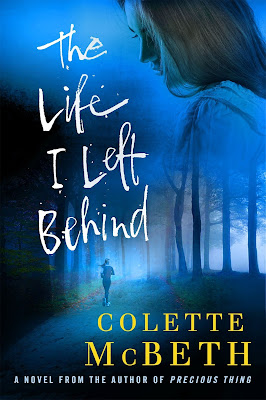 The problem is, David, the man who was imprisoned for the first, unsuccessful, attack was probably not the guy who did it, in spite of the fact that, just after David is released after serving his nine year term, the second victim, Eve, dies. Eve appears in the novel as a ghost, but doesn’t interact with anyone except the reader. She’s a ghost who can’t comfort anyone and who exists in pain. She never thought this was what being dead would be like and she’s not quite certain why she’s hanging around.

Melody, the first victim, who didn’t die nine years ago, has nevertheless, not actually recovered. She is putting on the bravest face she can for her fiancé, Sam, and their friends, but she’s still suffering from the attack. She’s become obsessive about many things, which makes the sterile house she lives in with Sam neat and tidy. She’s also become a great cook. But this is all because she can’t bear to go outside alone any more and has to keep busy to keep from looking inside herself.

Eve was killed because she had figured out who really attacked Melody. She’s standing by, agonizing over whether or not Melody can figure it out in time to prevent the killer from coming back and finishing the job. You’ll be on the edge of your seat with this one.