Monday With Kaye: "“The Cat, the Devil, the Last Escape” by Shirley Rousseau and Pat J. J. Murphy (Reviewed by Kaye George)

In between doing author things as Janet Cantrell for Fat Cat Spreads Out, Kaye George came on by with her latest installment for “Mondays With Kaye.” Good thing too or I would have had to run Mondays With Maury instead. I was not looking forward to doing that as it does not have the same ring to it for one thing. I would also have to find somebody who writes as Maury to contribute for another. I am a little worried about Kaye though…..she do seem to like the books with supernatural elements a little too much.

“The Cat, the Devil, the Last Escape” by Shirley Rousseau and Pat J. J. Murphy

Don’t think that, just because there’s a cat on the cover, this will be a light, cozy book. It’s pretty gritty for a book with a talking cat. Misto is a ghost cat, though, so that’s different. 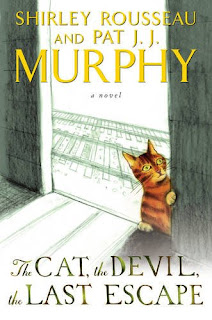 There’s a lot that is different about this series. Rousseau writes a cozy series, the Joe Grey series, as well as books for all ages of child, plus fantasy, but when she teams up with her husband, the books gets darker. Murphy is a retired probation officer, which is probably why the prison scenes seem to ring with authenticity. Lee Fontana makes his second appearance with Misto, this time locked up for a robbery. Lee’s grandpappy, a train robber, instilled the love of robbing trains into his grandson. The old man also carried a curse that has been handed down to Lee.

Misto became a ghost cat when he died while he was living with a little girl named Sammie. Sammie has a special gift, dreams that portend the future and some that connect with other people in the present. Misto splits his time between Lee and Sammie because he has a mission: to bring about justice for Sammie’s falsely accused father. Several characters acting on behalf of the Devil are determined to get in the way and continue the curse, but Lee, Sammie, and Misto are just as determined to get the best of Satan.

In spite of the various supernatural factors, the characters seemed very real. I was drawn to them and read avidly, caring about what would happen to them at the end of the book.

I had no idea this series existed, Kaye. I love Joe Grey and had wondered why the next installment wasn't out yet. Yay! I will definitely will look this one up. I'm hoping though that the price of the Kindle version is less. $18? Must be the hardback. Thanks for bringing it to my attention!

Thanks, Kevin--on my TBR pile!