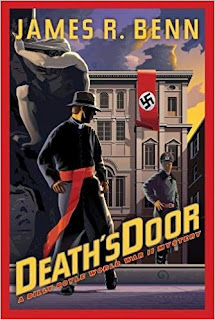 Death’s Door by James Benn (Soho Crime, 2012) is the seventh title in a compulsively readable historical series set during World War II. Billy Boyle is a member of a tight-knit Boston Irish family who, having lost a brother during World War I, decided to pull some strings when Billy’s draft number comes up for the next war. One of his mother’s cousins is married to an Army general and the family finagles an appointment for Billy to his staff, congratulating themselves that he will sit the war out in safety in Washington, DC. When the cousin, General Dwight Eisenhower, is appointed Commander of the European Forces and moves to London, Billy finds himself on the front lines of the war in the kind of danger his family hoped to avoid.

His previous experience as a detective on the Boston Police Force stands him in good stead in the military and he becomes General Eisenhower’s unofficial investigator and troubleshooter, traveling all over Europe. In this story an American monsignor serving the Vatican has been stabbed and Billy is assigned the task of finding out why and by whom. The local police found a Jewish refugee near the body and turned him over to the Nazis, closing the case. The monsignor had influential friends in the United States who are not convinced the answer was that simple.

First Billy and his sidekick Lieutenant Piotr “Kaz” Kazimierz have to be smuggled into the Holy City, crossing German-held territory, and then they have to negotiate their way among the dizzying number of political and national factions within the Vatican to identify the killer, then they have to find their way back out. Complicating the task is the knowledge that Billy’s war-time girlfriend has been captured by the Germans and he’s been ordered not to try to find her for fear of disrupting undercover operations.

This book is as much of a historical snapshot of the last months of the war before the Vatican was liberated by the Allies as it is a mystery. It describes the complex and tenuous status of the Pope and everyone in the Vatican in authoritative detail. While in theory the Vatican City was neutral, it was also completely surrounded by the German army who could easily overrun the Papal State, so it was essential for the continuation of the Vatican for them to placate the Nazis. In the meantime many members of the Catholic Church hid Jews and refugees at great personal risk to themselves and to the Church. The Pope and his most senior officials walked a dangerous tightrope every day, appearing to follow the rules set down by the Germans while helping the thousands of refugees who made their way into the Holy City. The book also highlights clearly the lack of solidarity among the German allies, who joined Hitler for many reasons, not necessarily because they admired him.

This is a fine historical series, easily balancing academic detail and mystery plot without sacrificing sound characterization and engaging writing.

Aubrey Hamilton © 2018
Aubrey Hamilton is a former librarian who works on Federal IT projects by day and reads mysteries at night.
Posted by Kevin R. Tipple at 1:00 AM