Review: Down and Out Volume 1, Issue 2 Editor Rick Ollerman 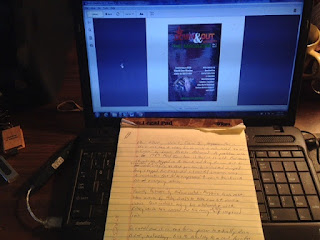 Down and Out: The Magazine Volume 1, Issue 2 offers a short welcome back note from Editor Rick Ollerman before diving into the short stories. First up is the tale titled “One at a Time” by Lissa Marie Redmond. The problem with a 1969 Ford Fairlane is that it is old.  Bad news if you are trapped in the trunk and being driven out to somewhere out in the woods so that you can be killed and dumped. Being strapped for cash and a beautiful woman was the combination that led to imprisonment in a trunk with no emergency release.

“Family Business” by Andrew Welsh-Huggins comes next where a man by Foley needs to take care of various issues. That includes ending his relationship with Kelsey. A relationship that has had its benefits, but that has also crossed too many of his self-imposed boundaries. 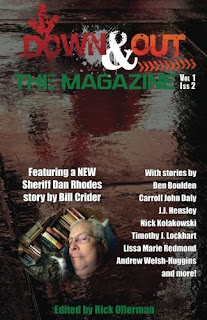 In a world where it is rare for a person to actually drive a car, technology has the ability to record, for a fee, everything in your loved one’s home after their death. “Closure” by Nick Kolakowski details a small slice of that world where a VR recorder can move from room to room scanning and collection the visual record in order to recreate the place later for the family. It can also be used in other ways which the customer may never see.

As he was in the first issue, J. Kingston Pierce of the website, The Rap Sheet, is back with his book suggestions column, “Placed into Evidence.” Just take a moment and go ahead and get out your checkbook, your credit card, or your library card, as there is reading to do.

A work by the late and deeply missed Bill Crider comes next. “Tell the Bees: A Sheriff Dan Rhodes Story” features the good sheriff at work in a mystery story with plenty of humor and Texas flavor. Note that the next and possibly final installment in the long running Dan Rhodes series, That Old Scoundrel Death, is scheduled for release in February 2019. I keep hoping that his daughter, Angela Crider Neary, will pick up the Sheriff Rhodes legacy as she is the only person remotely qualified to do so.

Timothy J. Lockhart is up next with his tale “Last Night at Skipper’s Lounge.”  It has been quite a few years, but the bar that Mackey spent a lot of time in during aviation officer candidate school still stands. Mackey is back in Pensacola as the bar will soon close for good. Back to relive memories good and bad and maybe make some new ones. 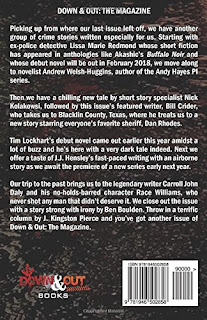 Sam has a problem and he is pretty sure his current plane ride is going to end badly for him and everyone onboard. In “A State of Decline” by J. J. Hensley, Sam has to try to talk some reason into the man who just killed everyone who could fly the plane. Not only has he got to figure out how they are going to safely land the plane with the flight crew all dead, he has to figure out a way to disarm the man who has proven more than willing to use that gun.

“Say It with Lead: A Race Williams Story” by Carroll John Daly comes next. This story originally appeared in the June 1925 issue of Black Mask Magazine and it is a good one. Howel L. Foster knows that his life is about to be in serious danger. Mr. Foster knows as he is a man of resources who has his fingers in a lot of endeavors. He also knows who is most likely behind the threat and knows the motive most likely would be revenge. He wants Race Williams around to prevent his death. Should Foster die anyway, he intends to set up things so that the person who captures or kills those responsible will get two hundred thousand dollars. Foster hopes that by having Race Williams at his side and letting it be known that if he is killed the well-known Race Williams would come after the killer or killers for the two hundred thousand dollar reward just might keep him alive. To make all this happen and to make sure the word gets out Foster will pay him a significant sum of money know for Race to accompany him back home and make his presence known. The deal is struck and soon Williams and Foster are headed north out of NYC on the business of trying to keep Foster alive. As always, the context introduction by Rick Ollerman is very helpful to the reader.

Revenge is also a theme in the closing story, “A Calculated Risk” by Ben Boulden. It has been six years, two months, and thirteen days since everything changed. Most folks would have forgotten. He had lost it all. But, like the proverbial phoenix, he is back with a vengeance and a plan. Harry is ready to have his revenge.

A final word from Editor Rick Ollerman previewing the third issue and a listing of other books available from the publisher brings the second issue to a close.  Building on the strength of the first issue, the second issue is another solid and highly entertaining read. The book column from J. Kingston Pierce is a definite winner as are the short intros to each story that place the work in context while also making reading suggestions.  Down and Out: The Magazine Volume 1, Issue 2 is a solidly good read and very much worth your time.

My review last month of the first issue.

Down and Out: The Magazine Volume 1, Issue 2

Material was purchased by way of a gift card from my oldest son late last December.