Review: A Gathering Of Secrets: A Novel by Linda Castillo

“’Sooner or later all of these weird little secrets everyone is keeping are going to come to light.” I put the vehicle in gear and pull onto the road. “When they do, we’ll have our answer.'” (Page 130, A Gathering Of Secrets: A Novel, Linda Castillo 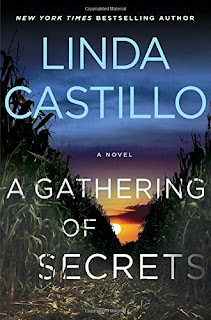 Hideous secrets regarding horrible themes have always been a major part of the books by Linda Castillo. That tone was set from the very first book in this series, Sworn To Silence. That fact is certainly true in her latest, A Gathering Of Secrets.

Chief of Police Kate Burkholder got the call around 4 am that the Gingerich barn, located at their farm a couple miles outside of Painters Mill, Ohio, is on fire. A barn fire is a disaster, but with the help of the neighbors they can rebuild. A far bigger concern is the fact that Miriam and Gideon Gingrich can account for their other children, but not eighteen year old, Danny. He is missing and nobody has any idea where he might be.

By the time Chief Burkholder got to the farm, the scene was controlled chaos as volunteer firefighters and others worked to put out the massive blaze at the Amish family farm. She organized the first stages of the police search for the missing teenager, but it is only after the horrendous fire is out that a body is discovered. Whether that badly burned body was the remains of Danny as Chief Burkholder and others suspect will take time to determine. Who that person was and what happened is the launching pad for A Gathering Of Secrets.

A powerful and intense novel from start to finish that again refers to earlier events in this very good series while also exploring the frequent themes of justice and vengeance. Along with making sure to keep readers entertained with the evolving stories of numerous secondary characters, author Linda Castillo weaves another interesting tale of mystery and intrigue through the main storyline. A storyline that will strike a painful chord for a significant portion of her readership.

This series has always contemplated dark truths while encouraging the reader to think about justice, punishment, and more. Such is the case in the latest in the series, A Gathering Of Secrets. Highly recommended as is the concept of reading these books in order starting with Sworn To Silence.


Book provided by the good folks of the Dallas Texas Public Library System.

I agree with you 100% Kevin. This one is a page turner and does point to some very significant issues that are currently in the news.

Enjoyed it very much. Never got preachy either which shows an author's skill.