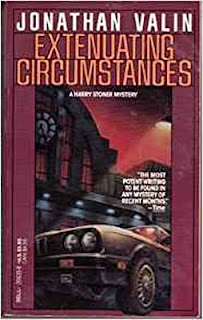 At the behest of Len Trumaine, business partner of Ira Lessing, Cincinnati-based private detective Harry Stoner travels to Covington, Kentucky to consult with Trumaine and Lessing’s young and emotionally fragile wife Janey, both of whom are deeply upset because Ira has been missing for two days. When Stoner points out that “There are all sorts of reasons why a man might drop out of sight for a short time,” both insist that Lessing is not someone whose habitual behaviors would have him do so without alerting those closest to him. Apart from being a member of one of the city’s oldest families and a businessman, he’s a city commissioner.

In pursuit of the elusive Lessing, Stoner encounters a number of the man’s relatives and associates, the majority of whom regard him as almost saintly. When Stoner’s investigation determines it’s almost certain Lessing is dead, Trumaine urges him to pursue further inquiries. When he does, Stoner learns that Lessing was murdered in a particularly torturous manner. Further digging reveals that the esteemed Lessing had a darker side to his life, one that even the closest to him would have a difficult time believing—and Stoner must confront and deal with several of them. His investigation eventually brings him face-to-face with the arrogant and vicious individual ultimately responsible for Lessing’s death.

Besides being an avid reader of detective fiction since I was a pre-teen, I spent a good many years of my life working in sales and management of high-end audio/video retail companies. What, you may be wondering, does this have to do with a mystery novel? Jonathan Valin wrote eleven Harry Stoner books (I’ve read all but one, as of this review) which have deservedly garnered praise from reviewers, and which have placed him, along with Timothy Harris, Stephen Greenleaf, Earl W. Emerson, and Loren D. Estleman, in the upper echelon of those authors who have followed and extended the footprints of Hammett, Chandler, and Ross Macdonald. (If you’re wondering why I didn’t include Robert B. Parker, it’s because I’ve long thought—heresy, you shriek!—he’s grossly overrated.) It came as both a surprise and—later on—as a disappointment that Valin gave up writing this exceptional series in favor of the audio magazine Fi he co-founded, and which eventually folded and led him to start reviewing for other audio/video ezines in favor of returning to the mystery fiction that placed him as a stellar performer in the hardboiled field. (See https://en.wikipedia.org/wiki/Jonathan_Valin and check out the link in the second footnote beneath the article.) He was—and, presumably, still is—an excellent equipment reviewer; I can’t say because since retirement I’ve given up reading audio/video magazines.

Be that as it may, Extenuating Circumstances in particular and the Harry Stoner series in general is recommended to those readers who aren’t offended by strong language, on-page violence, and occasional sex.

Some of Derringer Award-winner Barry Ergang’s work is available at Amazon and Smashwords. The latter site is running its annual sale through the month of July. Barry and Kevin Tipple are among the participating authors, so take advantage of their reduced prices.

I've enjoyed all of Jonathan Valin's private eye novels. I wish he'd written more of them.

Barry – I’ve only read a couple of Valin’s books and that was a long time ago. Thanks for the reminder to read more of them.

Like George, I enjoyed every one of Valin's Harry Stoner novels. I first discovered him around the same time as Greenleaf, Pronzini, and others. It's been a very long time since I re-read one of his books. Perhaps I should do that soon.